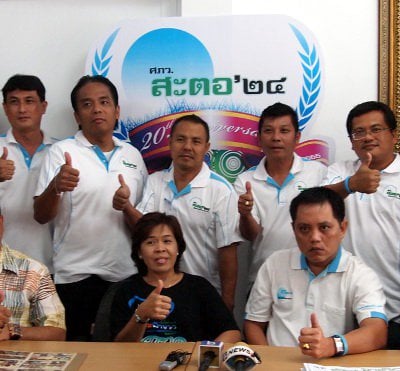 PHUKET: The parents of Jaruwat “Dome” Cheawaram, who last Sunday won the national singing contest The Star 8, today publicly thanked the people of Phuket and all Dome’s fans around the country for their support.

Dome’s parents, Tawatchai and Raewadee Cheawaram, also announced that Dome will sing at the opening ceremony of the the Thailand National Youth Games in Phuket on May 26.

Joining Mr and Mrs Cheawaram at the press conference, held at the offices of the Sator 24 Group in Phuket Town on May 4, were Phuket MP Raywat Areerob and Sator 24 Group leader and Khon Rak Phuket Club (“People who Love Phuket Club”) representative Boonsuppa Tantai.

The Sator 24 Group is an alumni club for former students of Phuket Wittayalai School, where Dome graduated two years ago.

The group set up the fund that paid for the billboard opposite Central Festival Phuket that features the photo of Dome and carried a message of support for him. A similar billboard was posted near the Heroines’ Monument.

Since Dome was announced the winner last Sunday night, the billboard opposite Central Festival now bears a message of congratulations.

Dome is now a second-year law student at Thammasat University,

“On behalf of the Cheawaram family, I would like to thank the people of Phuket and all the people across the country who have shown their support for Dome. He was crowned winner of The Star 8 because of everyone’s votes,” said Mrs Raewadee.

“Dome will come back to Phuket to express his gratitude through the sound of his voice. Phuket will host the National Youth Games, called the ‘Phuket Games’, at the end of May, and it is a great honor for Dome to be invited to be part of the opening ceremony,” she said.

Mrs Raewadee commended her son’s commitment to supporting his family while finishing high school and supporting the family through his singing.

“We have been through a lot of difficult times together, especially when Dome’s father was still in hospital. He was in Matthayom 6 [grade 12] of Phuket Wittayalai School at that time,” Mrs Raewadee said.

“Dome had to support the family by singing in many restaurants in Phuket. Each night after he finished singing, he went to stay with his father in hospital. Then he went to school every morning.

“But we always supported each other and we stuck together to get through those difficult times,” she added.

“During the competition, we always supported him, telling him to fight on and not to give up. I told him I believed in him,” said Mrs Raewadee.

Mr Tawatchai, also a part of Sator 24 Club, said, “Thank you, Phuket. Dome is a good boy. He works hard, but I want him to never forget who he is and where he came from.”

A proud Mrs Raewadee said Dome would continue to carry on being a good example of Phuket’s people and to help promote Phuket, through his singing.

“And I would like everyone to continue their support for my son,” she added.

Looking to Dome’s future, Mrs Raewadee said she understood if Dome wanted to pursue a career in singing, but that she would prefer he complete his law degree first.

“It would okay if he took one year off from his studies, but then I would like to see him complete his university degree,” she said.