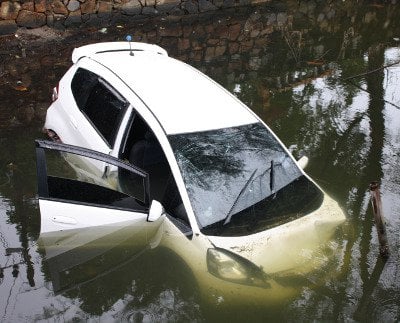 Phuket City Police were notified of the accident at 3am.

At the scene they found a white Honda Jazz almost completely submerged in the saltwater pond, not far from the central stage area at Saphan Hin. It’s six soaking wet former occupants stood nearby.

Chamaiporn Rongwang, the 23-year-old owner and driver of the vehicle, told police in a state of near shock that she and her friends had been out at a nightclub near Phuket’s Nimit Circle and were returning to their home in Wichit.

She opted to take Soi Saphan Hin as a shortcut. Dangerous enough in the light of day, the narrow and winding road proved too difficult for Ms Chamaiporn to navigate in the darkness. She drove the car straight into the pond near the Sipa Building, where the annual Loy Kratong festivities are held.

The tide was high at the time and car was almost completely submerged.

All six were trapped inside by the car by the central locking mechanism.

Fortunately, the window happened to be down on the front passenger’s side and all six managed to scramble to safety after they opened the door from the outside.

Remarkably, there were no serious injuries reported, though Ms Chamaiporn was crying hysterically.

Although the six admitted they had been out clubbing, police opted not to test the driver’s blood-alcohol level.

Due to its exposure to salt-water the vehicle is a complete write-off.

Pulled from the pond with a sling hoist earlier today, it will have to be sold for scrap.