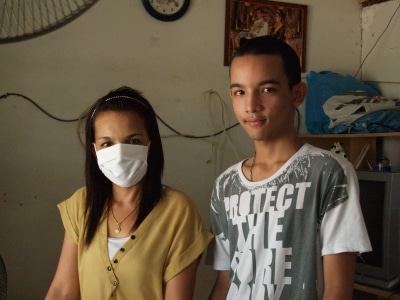 PHUKET: Jenarong Tapklaeng, a 16-year-old leukemia patient from Phuket, spent almost a month in Bangkok for medical consultations that should have taken just a few days after his hospital was shut down because of the red-shirt protests.

Doctors at King Chulalongkorn Memorial Hospital were set to examine the possibility of performing a bone marrow transplant on Jenarong, who is currently undergoing a course of chemotherapy.

But after more than 200 red-shirts stormed the hospital on April 30, causing an evacuation of around 600 patients, his consultation was delayed.

The visit had been made possible after Jenarong wrote to HM King Bhumibol Adulyadej for help and received an 800,000 baht donation from the Thai Red Cross in response.

A host of other organizations made donations, as well as individuals who read about the 16-year-old’s plight in the Phuket Gazette.

After finally carrying out a full consultation, doctors at Chulalongkorn Hospital said Jenarong needed to complete his one-year chemo course, ending in September. They said they would leave whether or not to perform a bone marrow transplant to his doctors at Prince of Songkla University Hospital in Haad Yai.

Jenarong’s mother, Wasuthida, said doctors at Prince of Songkla University Hospital told her a bone marrow transplant was the final option for her son’s treatment.

“He has to take chemotherapy medicine until it can no longer relieve his symptoms. Then the transplant would be needed,” she said.

“The doctor said leukemia cannot be cured. Medicine just stops the symptoms, allowing the patient to continue living without much pain,” she said. “With the medicine, tests of my son’s blood show he’s in good condition.”

Jenarong is receiving non-formal education (known as Kor Sor Nor), attending school only on weekends or to take tests.

“I still wish I could go to school and play with my friends,” he said.

Couple get lucky with stolen ATM card, then get arrested

Tourism: Phuket better than most