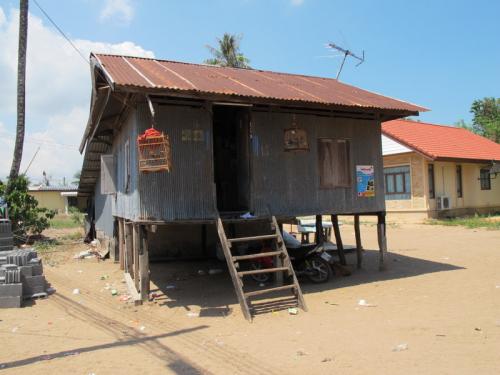 PHUKET: Fearing they will have nowhere to go if court-ordered evictions are carried out, villagers at the southern Phuket sea gypsy community in Rawai have steadfastly resolved to stay put.

“Our people have been living here for more than 200 years. Our homes once lined the length of the beach, but now we have only 19 rai to live on,” said village elder Ngeam Dumrongkaset, 68.

Put Hadthong, 48, and his family refuse to move.

“We have nowhere to go. My family has been living here for more than 60 years. Although they say they have documents to prove who owns the land, this is the land of our ancestors. No matter what happens, I will stay here. I will die here,” he said.

Mr Put learned of his eviction notice after his nephew handed him the court order when he returned from work one day in 2009.

“It was on the afternoon of March 21. I had just come home from work. My nephew said that court officers had delivered a court order requesting that I attend court two months later. It was only then that I learned the land I have been living on apparently belongs to Mr Piyawat Sa-Ngeamkul,” Mr Put said.

“Not only I, but the people living in seven other houses also received the court order,” he added.

The villagers went to court on the prescribed date, where they met Mr Piyawat’s lawyer.

“He also wanted to build an area at the entrance to the village where we could sell fish. He said he would promote our village to tourists and persuade them to visit us to see how we live.

“We declined his offer. We did not believe him, and we do not like that kind of lifestyle. We would like to keep some privacy, instead of having tourists come through our village and our homes all the time. We like living the way we are now, we are happy enough,” Mr Put said.

After five court appearances, the court finally – on February 28, 2013 – ordered the villagers to vacate the land.

Maren Bangjak, 60, also learned that the land his family has been living on for generations may not be theirs.

“My sister was given the court order. I cannot remember the date, but it was after Mr Put and other neighbors were ordered to appear in court.

“Me and my neighbors have no idea what to do now, but we know for sure that we will never move out. I just hope that the officers from the Rights and Liberties Protection Department will be able to find a way for us,” he said.

“There are 13 people in my house. It’s a small house. We have less and less space to live in and they still want to force us to move,” he said.

“Mr Piyawat’s land is about 2.5 rai, starting at the main entrance to the village. Before, the land belonged to Wan Areerob. He lived in our village, selling coffee. After he died, his son mortgaged the land, but he could not make the payments, so the bank foreclosed on the land,” said Mr Ngeam.

Mr Chamroen owns land adjacent to the sea gypsy village, and has laid claim to land that sea gypsies now live on.

“He filed a complaint to the court. The court issued the warrant and finally ordered us to move out,” Mr Ngeam said.

Mr Put placed his faith on the Rights and Liberties Protection Department under the Ministry of Justice to provide much-needed help.

Pol Col Narat Savetanant, director-general of the Rights and Liberties Protection Department, and a team of officers held a meeting with about 300 villagers on March 16 to discuss the issue.

“We wanted to talk to the villagers to let them know that we are working with other government departments so we can come up with a reasonable solution,” Col Narat said.

As testament to the sincerity of his department’s efforts, immediately after meeting the villagers in Rawai, Col Narat led a meeting at Phuket Provincial Hall to highlight the sea gypsies’ plight.

“The Ministry of Interior, the Department of Special Investigation and the Royal Thai Police are cooperating to find a way to fight the claims, and to find a lawyer to represent the sea gypsies,” Col Narat told the meeting.

“Our officers will be reviewing maps, historical photos and conducting interviews to prove that the Rawai sea gypsies have been living there for generations,” he added.

“We are hoping they will be able to help us. They told us they will set up a meeting in Bangkok to discuss our problem. After that they will come back to meet us again and tell us their agreement and solution,” he said.

“We have nowhere to go.”