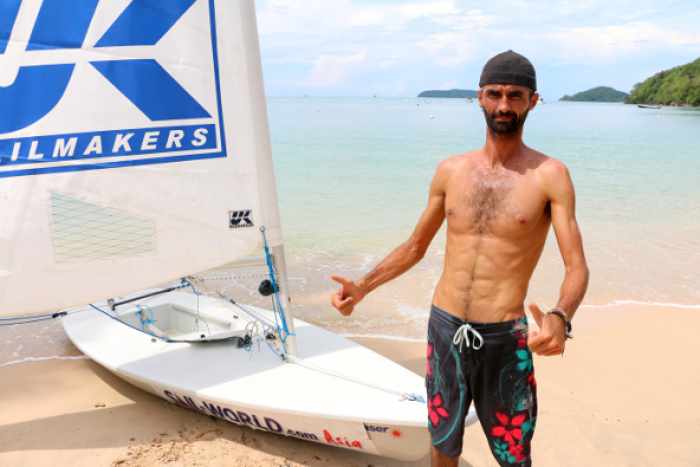 PHUKET: “I’m hoping it will take me no more than 48 hours,” Yassine Darkaou told me when I met him in Ao Yon in Cape Panwa, on Wednesday May 28, minutes before he took off for his record breaking journey. A grueling 77 hours later he reached the shore again, with not one, but two records in his possession, neither of them, however, were the one he was aiming for.

Darkaou was trying to sail the longest distance ever in a single handed dinghy. The current record is held by Tania Elías Calles from Mexico, who sailed 300 nautical miles, which took her 65 hours to achieve. Even though Yassine spent 77 hours on the water, he covered 89 miles less – 211 nautical miles. Still enough to make him the world record holder for the longest time spent sailing a dinghy and Asian record holder for the longest sail in this type of boat.

“Tania Elías Calles was sailing from point A to point B. We, on the other hand, have a lot of islands here and changeable winds so I had to adjust the route on the go.”

“About 40 per cent of the time I didn’t have wind so to finish 300 miles I’d have to stay on water for 5-6 days,” explained Yassine, “Once I was on the water I had to adapt my strategy. There were a lot of surprises, the wind wasn’t at all like in the forecast and I had to find new ways to finish.”

Sitting for 77 hours in the limited space and exposed to the elements took its toll on the 35-year-old, Moroccan sailor. Salt water, sweat and humidity caused serious skin irritation eventually leading to bleeding “At the end, I was in so much pain I couldn’t sit anymore. I tried different positions, even on my knees, but it was not possible.”

“I also had hallucinations. For a while I could clearly hear Sufi music ringing in my ears. It was beautiful.”

It took two years of preparations – both physical and formal, to take up the challenge. No wonder Darkaou feels relieved having completed his goal. “I feel relaxed because this was something I was waiting for for a long time, it took a long time to happen and I’m glad we did it.”

“It was definitely worth it and a lot of fun. It was a big pleasure. Sailing is beautiful and I like the dinghy because it keeps you closer to the elements, you have to be their friend, feel the current, the wind.”

Even though Yassine has just completed the challenge he isn’t daunted by the idea of getting back on water. In fact, he’s already dreaming of another challenge.

“Next, I want to sail from the North to the South of Phuket in the fastest possible time, maybe in July or August. But for now, I’ll go back on the water just to have fun.”

Yassine and his team will celebrate his achievement on Thursday (June 5) in the newly opened La Boucherie Grill & Steakhouse in Chalong. For more details go to andamanlaserchallenge.blogspot.com or facebook.com/pages/Andaman-Laser-Challenge.