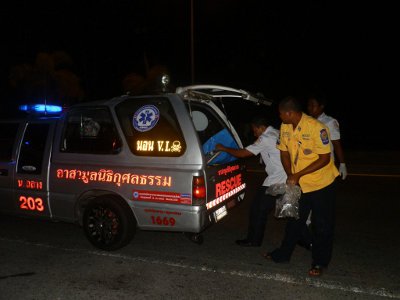 PHUKET: A Phuket resort worker was found dead at the scene of a motorbike accident in Mai Khao early this morning.

Police believe the man, who they named as 35-year-old Kowit Pleeda, died instantly when he crashed his motorbike into the back of a vehicle.

No other vehicles were at the scene, on the southbound lane of Thepkrasattri Road, near the old traffic checkpoint in Ban Suan Maphrao, when police arrived at about 5:20am.

The deceased was wearing a green polo shirt bearing the logo of the nearby Piyriya Resort and Spa at Mai Khao Beach.

Staff at the resort confirmed that Mr Pleeda was a driver for the resort and was on his way to work when the accident occurred. He had been employed by the resort for about seven months.

Mr Kowit is survived by a wife and one young child. His family has been notified of his death, resort staff said.

There were no witnesses to the accident, but local residents said drivers of large trucks often parked along the side of the road to rest in the area, which is well lit by street lights.

From the damage to the motorbike and Mr Pleeda’s injuries, the most likely cause of death was Mr Pleeda hitting a large vehicle from behind, said Thalang Police.

However, if such were the case the driver of the truck must have left the scene before police and rescue workers arrived, Lt Col Wacharin said.

One of the rescue workers said that Mr Preeda probably would have survived the crash had he been wearing a high-quality, full-faced crash helmet.

Phuket Live Wire: The next iPad is here