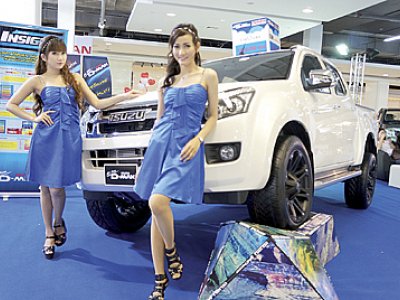 PHUKET: THE 14th Andaman Motor Show, organized last week at HomeWorks, opposite Central Festival Phuket, concluded with one of its most vibrant years in car sales.

The six-day event, this year under the theme “Summer on the Beach”, ended on Wednesday.

“We don’t have final figures for the overall number of car loan applications yet, but I have to admit that we are making better sales this year than the first two years we attended,” said Phichet Siripreuttikun, Kiatnakin Bank’s New Car Loan Marketing Manager for all of Thailand.

“By the nature of this kind of event, people usually make their decision whether or not to buy a car on the second-last day or on the final day of the show,” he added.

The trend for the car buyers this year is favoring pickup trucks and eco-friendly cars, said Mr Phichet.

“Pickups have became more popular since the flooding in Central Thailand, but this year is another good year for the eco-car market,” he added.

“We have approved more loans for people in Phuket compared with all other provinces in Southern Thailand,” Mr Phichet explained.

“Besides the wide range of vehicles from all the top dealerships, people who want to buy a car can expect special promotions that are difficult to resist,” he added.

“I want to buy a pickup truck and I came to this event because I know I can expect tempting deals here – and I have found some great deals, even better than what they are offering at the showrooms,” said Mr Sumed.

“I will have to discuss this with my family and make a decision before the show closes,” he added.

Not all visitors were seeking a new car as the complimentary entertainment provided a major attraction in itself.

Popular Thai singer Kanitkul “Praw” Nestbud performed a mini-concert to a large crowd on Sunday, while the Andaman Junior Talent Contest on Saturday drew families from across the island.

And what Thai car show would be complete without sexy girl beauty competitions?

Every night of the event featured coyote dancers, with its finale: ‘Sexy Wash, featuring Ananya ‘Baifern’ Mongkolthai, runner-up of The Look Supermodel 2011 beauty pageant and the Final 20 contestant of the Miss Maxim 2011 contest, among other famous models.

Island officials have registered a decline in business dissolutions coupled with a rise in new limited liability companies (Co Ltd).

Figures from the Department of Business Development (DBD) show that only 16 company dissolutions were filed in the province in February, 2012, a 46.6% drop from the previous month (30).

Although exactly the same number of new company registrations were reported in February 2011, Co Ltd registrations this February rose by 10.1% y-o-y (from 128) while lp registrations dropped by 44.8% (from 29) over the same period.

The total number of dissolutions on the island decreased by 46.6% m-o-m, with failed Co Ltd ventures dropping by 60% down to only 10 from 25 the previous month.

A stabilizing economy is also apparent on the national scale, with all of last month’s new companies having combined worth of 30bn baht.

He highlighted that 5,747 new companies were registered across Thailand, with 2,100 of these made in Bangkok and 3,647 in the provinces.

Registered capital of all the new companies have a combined worth of 29.7bn baht, while dissolved companies were valued at about 3.6bn baht.

All in, there are a total of 501,749 businesses registered nationwide, including Co Ltd, LP, and ordinary partnership entities.

In addition to 920 Public Companies, the total number of registered businesses in Thailand is now 502,669.

A DBD registrar has confirmed with the Phuket Gazette that there are currently no public companies registered in Phuket.

Phuket Business: SET in the city