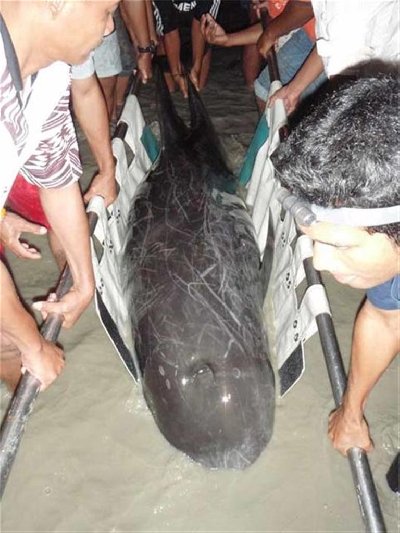 PHUKET CITY: A Risso’s dolphin that washed ashore in Chalong on Friday night and later died, might have been suffering from exhaustion due to giving birth, researchers at the Phuket Marine Biological Center (PMBC) think.

PMBC researcher Phaothep Cherdsukjai told the Gazette that by the time researchers arrived at around 11pm, villagers had already managed to push the smaller mammal back out to deeper water.

They quickly identified the remaining dolphin as a ‘Risso’s dolphin’ (Grampus griseus), known in Thai as a ‘melon head whale’ for the circular appearance of its head.

The researchers described the dolphin as a two-meter-long female weighing 200 kilos and between 20 and 30 years of age.

The PMBC staff treated the dolphin and trucked it to Chalong Pier, from which it was taken by boat to deeper water at about 1am, Mr Phaothep said.

The rescue effort failed, however. Villagers living near the Fisherman’s Way beach in Chalong Village 5 reported that the carcass of a dolphin had washed ashore at about 5am.

The PMBC researchers confirmed it was the same dolphin they had released earlier the same day.

An examination of the carcass found her stomach was empty. Given the size of the other dolphin, they suspect the smaller animal was its offspring and that the pair had become separated from their pod after the birth, Mr Phaothep said.

The baby dolphin will stand a good chance for survival, but only if it can somehow find its way back to the pod, he added.

Risso’s dolphins inhabit deep water, up to 1,000 meters, where they feed on squid.

They have little interaction with humans and strandings are very rare.

Their conservation status is classified as ‘least concern’ by the International Union for the Conservation of Nature and Natural Resources’ (IUCN).