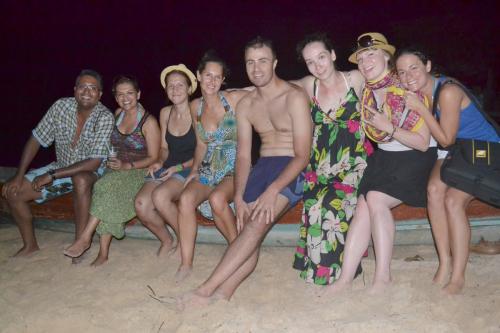 PHUKET: A beach party in Cape Panwa took a horrific turn after a Phuket English teacher went to light a 49-mortar firework on July 13. Immediately after the fuse was lit, the mostly buried firework exploded, sending one of its rounds directly into the face of Danyel Erickson, 31, while the rest shot off in every direction.

Ms Erickson, an American, bought the firework secondhand. She planned to set it off to celebrate the 4th of July, but decided against igniting it in her neighborhood. It was instead brought out on July 13 in celebration of a friend’s birthday.

“Just as it got dark, we dug this hole and put this massive box [the firework] in there. I think there were four of us standing around it. It was starting to rain, so we had cardboard up just to cover it,” Ms Erickson said.

Two fuses trailed from the 80cm-square firework: one short and black, the other long and green.

Hunched over, leaning toward but not over the firework, Ms Erickson lit the green fuse, she said. She believes that the two fuses, close together, both caught on fire.

“As soon as the fuse ignited, it went so fast you couldn’t even see that it was starting… all of a sudden the whole box was glowing. It started exploding out of the side, out the of top, everywhere all at once. It was pretty much like a bomb,” Ms Erickson said.

One mortar hit one of her friends in the hand, breaking it. He has since undergone surgery. Another mortar hit Ms Erickson directly above her left eye, blinding her.

“It hit me in the face, and I didn’t really realize it at first… I dropped to the ground and military crawled off the beach because they were just coming out everywhere,” she said. “I thought I was in a war, military crawling in the sand while I was blind.”

“I could feel the wet blood coming down my face – everyone started gasping,” she said.

She had internal bleeding in her left eye; large skin laceration front left side; right corneal abrasions; foreign bodies in both eyes; and lacerations on her forehead, eyebrow and left eye.

Ms Erickson has undergone serious plastic surgery, but will always have a scar from the incident. There are still pieces of dirt and debris lodged in her face that will require laser surgery, she said.

Three days after the event, still with lots of debris in her eyes, Ms Erickson was starting to see again with her vision improving to 50/20 and 80/20.

Since then, her vision has improved greatly, but will never return to the same clarity she once had.

“My first thought was that I was going to be blind. That was my first scare – to be blind in a foreign country and not now where you are going or how to get anywhere.

“I couldn’t really see anything. I couldn’t look in a mirror and see how bad it was. So I didn’t know exactly what my condition was,” she said.

Ms Erickson arrived in Phuket from Seattle in April to complete a TEFL course. She had just begun her career as an English-language teacher in May.

She bought the secondhand firework from a woman who had fired off four of them at a children’s birthday party.

“If they had lit the one that blew my face up, it could have killed children. It could have been a lot worse, astronomically worse,” she said.

“This is something people do here all the time… They sell [fireworks] on the beach, at clubs – everywhere,” she said.

“We were drinking that day, but I honestly wasn’t intoxicated. I did this sober, which doesn’t really say that much for me,” she said with a laugh. “I did it with a conscious, sober mind. I lit this giant, dangerous bomb and set it off.”

Instead of buying fireworks on the street, go to an actual pyrotechnic show, Ms Erickson urged.

“Salesmen should not be selling fireworks to adults who are not professionals,” Dr Bancha said.

The caution over the use of fireworks stems from the number of injuries sustained during festivals where fireworks are prevalent, such as Chinese New Year and the Vegetarian Festival where local children actually throw them at each other.

“A total of 43 people were injured from fireworks during the Vegetarian Festival last year – 10 of those had eye injuries,” said Dr Bancha. “Everyone must be aware of the danger.”

According to the Firearms Act of BE 2490, fireworks are considered weapons due to the amount of damage they can cause to groups of people when not properly controlled.

“Firework users must obtain permission before lighting them, even if they are being used on private property. However, there are no restrictions on buying fireworks,” explained Kathu District Chief Veera Kerdsirimongkol.

“In Phuket, it hard to control the use of fireworks because of traditions, so we have to compromise,” Mr Veera said.

Despite the need to compromise, Mr Veera reiterated the importance of safety and obtaining proper permission before using these potentially harmful forms of entertainment.

Phuket to get B251mn CCTV camera boost for tourist safety