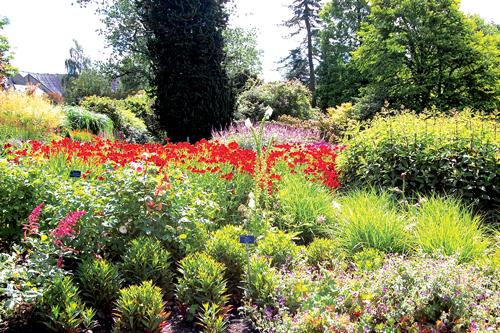 PHUKET: Can you reel off the Seven Wonders of the World without looking them up?

The one we all remember is the Hanging Gardens of Babylon. Nothing to do with hanging baskets. The Babylon one was hanging because it rose to a great height, and its main plants were substantial trees, not municipal petunias or busy lizzies. It was described later as “a palace… with very high walls supported by stone pillars… replenished with all sorts of trees… in exact resemblance of a mountain country.”

Commissioned by King Nebuchadnezzar, apparently to console his wife who pined for her native forests, it is conjectured that some sort of screw system propelled water upwards from the river Euphrates in a massive feat of irrigation.

I only mention this wonder as a brief addendum to a recent piece about contemporary roof gardens (click here for article).

Nowadays – and this goes without saying – we have so many technical advantages over the ancient world. Pressured main’s supplies, water towers or powerful electric pumps ensure that the vital fluid can be delivered to a penthouse roof or even an elevated hotel garden. Moreover, we have the advantage of computerized irrigation systems which can ensure that every plant gets the moisture it needs.

Even so, few roof gardens can boast mature trees, even less a verdurous wonder on the scale of Babylon’s marvel. It just shows what can be done.

The most impressive roof garden of my acquaintance was in Kensington, London, at the time the largest of its kind in Europe. It occupied the top of a large department store, 100 feet (30 meters) above street level, and contained three themed areas.

One was a Spanish garden with Moorish arches, chusan palms and vine-covered archways in imitation of the Alhambra in Andalucia. The second traditional garden boasted roses, lavender and hanging wisteria. But the piece de resistance was a simulated English woodland, with over 100 trees (30 native varieties), and even a pond with pintail ducks. Interestingly, the whole project sat atop a meter of soil. Cultivating mature trees with substantial and deep root systems demanded nothing less. You can imagine how much reinforcement the roof required.

On a more intimate note. Every gardener has their pet project, even if they are usually at ground level.

I recently visited a superb garden in Cherng Talay. Two rai (3,200 m2) of manicured lawns with specimen royal palms. The owner’s dilemma was how to render his garden more private, since the area beyond was being “developed” and he wanted to avoid being overlooked by a new neighbor. Interestingly, the development company had decreed that only a green fence must separate the terraced areas.

A laudable idea and one that should be copied. But the bank which separated each plot was steep – maybe 30 degrees – and there could be no retaining wall below to prevent water loss and soil erosion. To compound the problem, the soil was the usual Phuket mix of coarse sand and brittle clay.

What our friend had done was to create, after the manner of Gertrude Jekyll’s herbaceous borders, a graduated green screen with larger trees including palms and champacas behind, then a layer of substantial shrubs and finally ground plants near the front border. In general, the scheme was working well, though a large bread fruit tree had died, the heliconias were parched, and there were visible gaps. Some of the background palms had sparse fronds, but smaller yellow cane (dypsis) and dense lady palms (rhapis) provided plenty of cover.

An additional array of evergreen shrubs such as murraya, hamelia, fast-growing duranta or bushy shefflera would help when the owner extends his green screen. That is something he plans to do once he discovers what his neighbor intends. Certainly, more compost or top soil will need to be applied, if only to help the roots retain precious moisture and nutrients.

Tip of the week – Verdant screens

Container plants are an easy and movable way of screening unsightly objects. You need plants that will put on height quickly, and yet will adapt to life in a large pot. A bit of a contradiction since most container plants are naturally slow-growing.

Good choices include my personal preference, Plumeria luxon. That’s the Plumeria with a very upright habit, and bright green leaves that look like arrow flights. The fragrant white flowers are produced at the ends of the long stems. I use mine to blot out a plastic water tank that my neighbor unceremoniously plonked next to my garden wall. It grew six feet in a year.

Other sensible choices include non-woody Cordylines (though their sparse reddish foliage will sprout near the apex of the plant, and Dracaenas (corn plants) which are quicker off the mark and have lusher leaves. A much denser, bushier alternative is Schefflera which has glossy, variegated foliage.

If you have a question, or a garden that you would like featured, you can email the author here.

Phuket Raceweek: Racing with the wind – a wave of excitement

The wonderful world of puffies