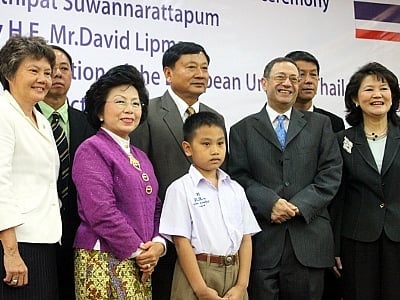 PHUKET: A nine-year-old Phuket student was yesterday honored with a personal visit from David Lipman, the Head of the Delegation of the European Union (EU) to Thailand.

The occasion was to mark young Suthipat Suwanrathpum being selected as one of the 14 winners in a drawing competition held by EuropeAid to highlight gender equality.

The drawing by Suthipat, also known by his nickname “Pookun” (meaning “paintbrush” in Thai), was selected from tens of thousands of children’s entries from around the world.

EuropeAid launched the competition on International Women’s Day to raise awareness of the need for gender equality through the creativity of children.

The competition this year invited children to make a drawing based on their interpretation of the theme “Once upon a time there were a girl and a boy; together they wanted to make the world a better place…”

In 2010, the competition attracted entries from more than 49,000 children in 61 countries.

At the event Suthipat received a laptop computer and round-trip flight tickets to Brussels for himself and his father, Mr Suphat, where they will participate in the opening of the exhibition of the winning drawings.

Mr Lipman was impressed by Suthipat’s piece. “Just look at this wonderful drawing and you can see why it was chosen as one of the winners. It is quite remarkable. You can see the scale in the drawing and the fact that women and men are represented as equal.”

“I think this is an incredible drawing, and I personally would have chosen it as well. I would like to hang it on my wall at home,” he added.

(Click here to see a large version of Suthipat’s drawing)

The youngster added that he had spent only one day working on the drawing.

Drawing is not his only ambition. “I want to be a football player when I grow up. I like Messi because he is a very good player, but I want to be a defender,” he said.

Suthipat’s mother, Mrs Phattira, told the Gazette, “My husband and I are teachers. We found out about the competition from the internet. In addition to this prize from the EU, Phukan is also going to receive a prize from HRH Princess Maha Chakri Sirindhorn,” she said.