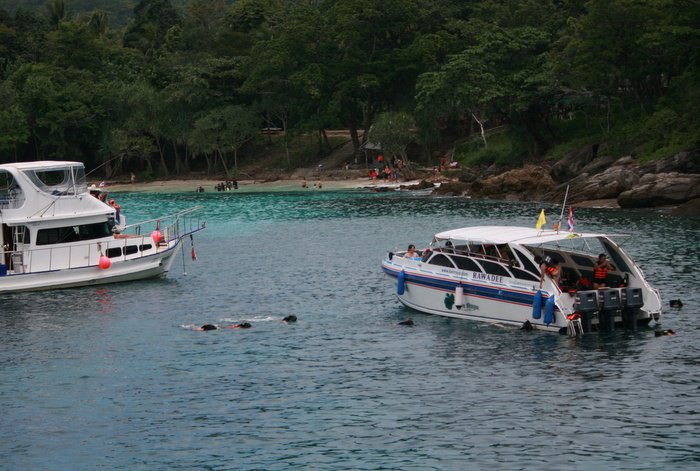 Damage done by the tourism industry was seen at 12 of the 14 marine areas within Hat Noppharat Thara – Mu Ko Phi Phi National Park. These areas were under official investigation this month.

“Only one spot still supports a healthy marine ecosystem, and that’s because it is a secret spot. Otherwise, it too would have been ruined by the tourism industry,” said Dr Thon Thamrongnawasawat, a member of the National Reform Council, who is at the park as a policy adviser (story here).

“There were 12 spots where the corals were seriously damaged and one spot where the damage was mid-level.”

In addition to a request for more boats, buoys and staff (story here), Dr Thon composed and submitted an action plan for the national park to the Department of National Parks, Wildlife and Plant Conservation (DNP).

“In order to manage the park effectively we have established six zones,” Dr Thon said.

The management areas are defined as: protective, where no boats and tourists are allowed; marine life improvement, for coral restoration and coral nurseries – which will see only limited boat traffic; special tourist, where only five or six mooring buoys will be established to limit visitor numbers; tourist; crowded tourist; and super crowded tourist.

“We divided up the park into these areas based on the tourist numbers we are already seeing at these locations,” Dr Thon said. “With established areas, officers will know exactly what measures need to be implemented and maintained at each location. Tourists will still be able to come and enjoy the beauty of Phi Phi and we can still earn money, but it will all be well controlled.”

Dr Thon confirmed that he will continue his research at the national park and push forward further proposals to the DNP as necessary.