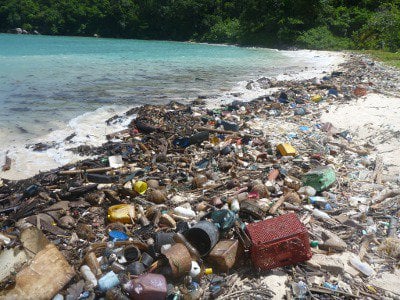 PHUKET: Island residents and local resort staff on Koh Phi Phi Don teamed up for a mass beach cleanup on Sunday, removing more than 100 trash bags worth of rubbish that had washed ashore.

Local residents together with more than 45 staff from the Holiday Inn Resort Phi Phi Island tackled the rising tide of trash at Lanah Bay, one of the key beach attractions in the area.

One of the resort staffers explained to the Phuket Gazette that the trash was first noticed about two months ago, and was steadily getting worse.

Other picturesque sites affected by the “foul flotsam” are Maya Bay on Phi Phi Lei Island and Nui Bay.

“We learned about the extent of the problem from guests, and some of our team members had already seen the amount of trash washing ashore firsthand,” said the resort staffer.

Asked what equipment was used to carry out the huge cleanup effort at Lanah Bay, the staffer replied: “Hands. Lots of hands. It took a lot of manpower.”

The Holiday Inn resort on Phi Phi Don was given permission to burn off all combustible natural debris, but all plastic, including plastic bags, as well as glass and other non-combustibles were taken back to the hotel.

“All the trash [that could not be burned off] will be shipped to Phuket on our once-a-week garbage boat run for separation and recycling at the Phuket Incinerator,” the staffer explained.

“We do not know where the rubbish is coming from. People say it is seasonal, with the trash arriving in May through October,” she explained.

“Local people say that more and more trash washes ashore each year. We have even seen a vortex of oil and dead fish with bags, sponges, shoes – all sorts of rubbish mixed in.

“Some people say the trash is dumped overboard by boats, some say it is washed from beach to beach, others say it is local villagers dumping it into the sea,” she added.

According to local reports, there is no municipal trash site on the island, “only a couple of privately owned incinerators”, the Gazette was told.

Despite the huge effort Sunday, it was impossible to remove all the trash from the sands.

“Some items, especially plastic bags, have been buried under the sand by the waves and changing tides. So despite our best efforts, we could not remove every item of trash from the beach,” the resort staffer added.