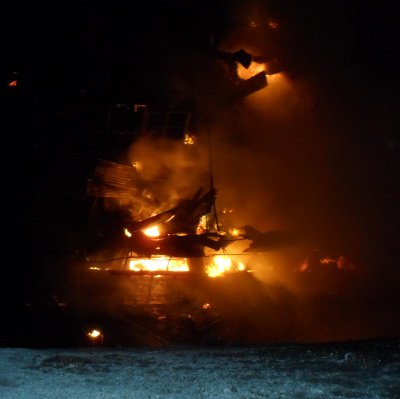 PHUKET: Police believe that children playing with fireworks may have accidentally started a fire that destroyed a workshop at Phuket’s Yacht Haven Marina last night.

Prai Junnoo, a 33-year-old security guard at the marina, reported the fire at about 9pm.

In that time, however, they were restricted in battling flames that were being fanned by the strong overnight breeze.

Adding to their woes, 500 liters of gasoline stored in the workshop erupted, destroying the building and everything within it, including electronic marine items, engine oil and yacht ropes.

The Phuket Gazette was told that the building would also have contained oxygen cylinders and materials used for welding.

Police estimate the damage at about 5 million baht.

“We suspect the cause of the fire may have been children playing with fireworks. We were told that there were a lot of dried leaves on the roof of the building,” Lt Col Rassada Kluemwong of Tah Chat Chai Police told the Gazette.

“Regardless, we have contacted the fire investigation unit of the Phuket branch of the Office of Forensic Science. They will investigate further,” he added.