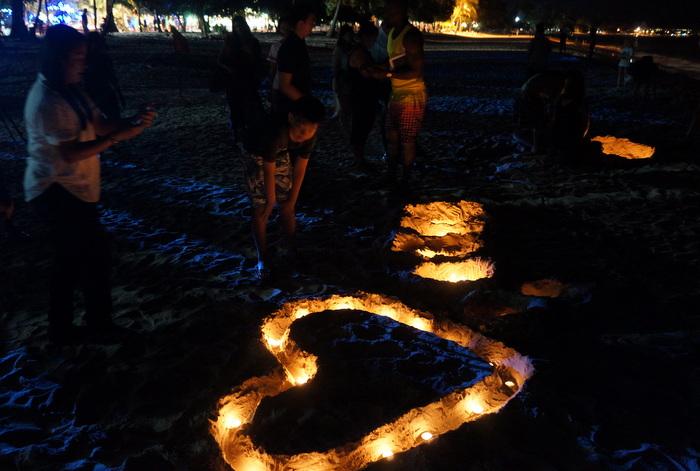 PHUKET: After much fanfare marking the 10th anniversary of the Indian Ocean Tsunami last year, the Light Up Phuket memorial on Patong Beach was extraordinarily quiet.

In years past, the entire beach was lit up with candles decorating sand sculptures. However, this year, no free candles or flowers were handed out, and only about twenty candles were set out in memory of the more than 5,000 people who died in Thailand from the devastating waves. Last year, the Phuket Provincial Administration Organization provided a budget for candles and other items to mark the 10th anniversary.

“We are deeply sorry for the people we have lost. They will never be forgotten,” said Phuket Governor Chamroen Tipayapongtada during an opening speech to about 30 people at the main stage in Patong. “Because we lost so much, we have learned so much. We have learned about how tsunamis work; we have learned how to help each other; we have learned to deal with mortality; we have learned what we need to do to prevent such natural disasters from destroying our communities.”

Governor Chamroen led other Phuket officials in laying out flowers in memory of the victims.

“Though we still feel the loss, we also have the memories of coming together and uniting as a community to comfort and heal those most in need. Walking together, we can now see how strong and beautiful Phuket has once again become,” said Patong Mayor Chalermluk Kebsup. “Those who were not able to attend the memorial service on Saturday can still come to the beach and light candles or place flowers to pay their respects to those we have lost.”

One man, who had fled Phuket after the tsunami, returned to the island for the first time to attend the memorial service.

“I did not lose anyone in the disaster, but I am very sorry for those who did. My wife and I had a small restaurant in Kamala that got damaged. Then, we closed the restaurant and returned to Ghana. This is my first time here after 11 years,” Zionthai Kumah, 45, told the Phuket Gazette.

“In the morning that day, I told my wife that I wanted to go to Patong. It was so lucky that my wife said she did not feel like going there. I went jogging on the hill in Kamala instead.

“We did not really know what happened until hours later. We were lucky.”

Natthawan Juthamontri, who lost her father that day, also attended the ceremony to pay her respects.

“I am still very upset; I will never forget losing my father,” she said. “He was a retired teacher and had come to rent sun loungers at Patong Beach with my brother, it was lucky that my brother wasn’t also on the beach when the waves came – we only lost my father.”

Ms Natthawan was pregnant at the time.

“His grandson, whose face he never saw, is 11 years old already. I take my son here almost every year so that he can pay his respects to his grandfather,” Ms Natthawan said.

No change in tuk-tuk safety regulations