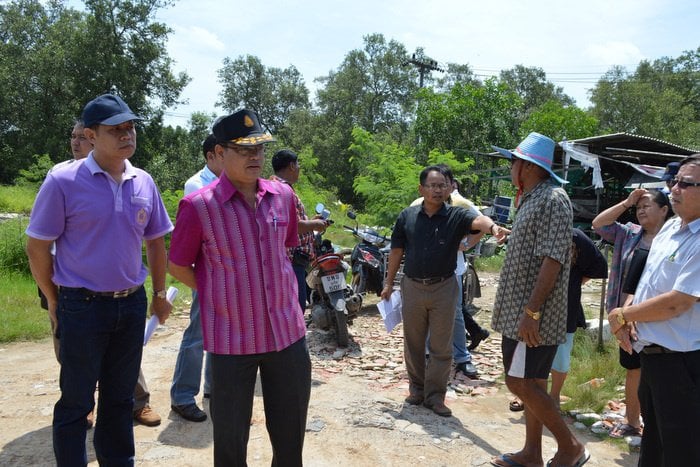 PHUKET: Phuket Vice Governor Suthee Thongyam inspected a group of pig farms in Chalong yesterday after villagers had filed a complaint about foul smells and the pollution of a local canal.

“About 100 locals filed a complaint with me about the farms, so I took the case to the Damrongtham Center,” said Kokchai Sae-iew, Moo 9 village headman.

“There are five businesses raising no fewer than 300 pigs in the village. I do not believe the farms are meeting health standards. It appears that there is no waste or ‘stool management’ system in place.

“Sometimes, stool is discarded into the public water line, causing the canal to become polluted and stink quite badly.”

After inspecting the site yesterday, Vice Governor Suthee gave the business owners 45 days to clean up their act before he takes any further action.

“The farms are on private land, so they have the right to run their businesses here. However, we did find many activities that could harm the environment and affect public health,” V/Gov Suthee explained.

He said he would call together relevant authorities to determine the best way to address the issue.

“Chalong Municipality will temporarily prevent the business owners from expanding their farms until we are able to investigate what is going on there,” he said.

“Meanwhile, Phuket Livestock officers will inspect the conditions of the camps and determine how many pigs are being raised there. If there are too many, the owners will be made to reduce the number. They will have 10 days to do so.

V/Gov Suthee said that all of these measures should take no longer than 45 days to complete.

“After all relevant officers complete their duties, we will go again to observe whether or not conditions have improved or not. If not, we will take further action,” he confirmed.

It was not revealed what further measures might be taken, if needed.