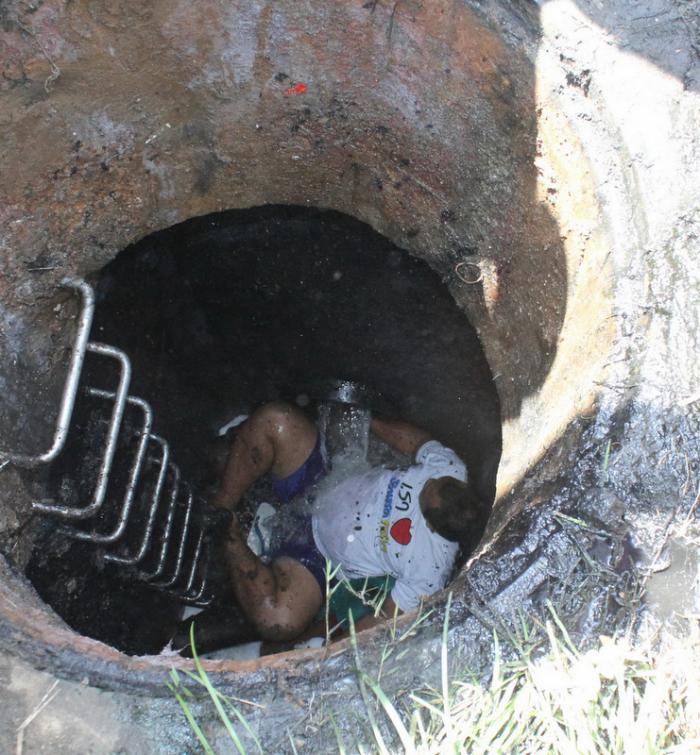 PHUKET: Four workers were killed by hydrogen sulfide fumes in a Phuket Town sewer this morning, and four others remain hospitalized after attempting to rescue them with inadequate equipment.

The four who died had been tasked with maintenance of a sewer access point about 100 meters from Tesco Express on Srisena Road, and they succumbed to the fumes one by one, trying to rescue each other.

The first rescue worker on the scene, Jessada Janpen, 25, held an oxygen mask to his face as he descended into the sewer to recover the men.

The mask failed to protect him from the fumes and he started to climb back out, but was overwhelmed and fell in, hitting his head on the side of the manhole.

Other workers used fans to dispel the gas and managed to pull Mr Jessada out in about five minutes, but were weakened and unable to retrieve the other four.

Using the masks, rescuers were able to secure rope to the four workers and use a crane to pull them out of the drain.

“It only took about 10 minutes to get them out, but by then they had been in the drain for almost two hours. Tragically, they all died,” said Capt Udom.

The four rescue workers remain in the hospital. Mr Jessada is unconscious and the three others are recovering, he added.

Pimook Sornmee, manager of the company the maintenance men worked for, explained that Thawat Chitchollatarn was the first person into the drain.

When co-worker Sanan Buachoom saw that he had fallen unconscious, he descended the ladder to offer assistance and also fell prey to the fumes.

The two remaining men, Suchet Chitcholaltarn, a relative of Mr Thawat, and Apisit Tipprasong, also entered the drain in an attempt to help and were overcome, Mr Pimook said.

Two other workers realized the danger and called for help.

“It is vital to wait 30 minutes after opening a drain cover to allow gases to dispel,” Mr Pimoon said.

He noted that the company carried insurance for its employees, but would also be talking directly with the families about compensation.