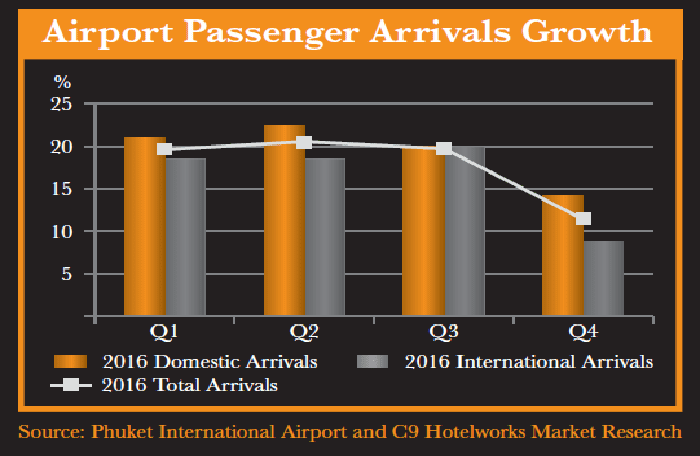 With total airport arrivals surpassing 7.5 million passengers, Phuket experienced a sharp year-on-year rise of 18 per cent, compared to 13 per cent the previous year. This is largely attributed to the resurgence of the Russian source market, which increased 51 per cent last year. The rebound was prompted by the strengthening of the ruble against the Thai baht and political volatility in the Middle East that shifted Russian tourists to the island during high season.

Another notable source market is Mainland China, whose arrivals were substantially affected after a nationwide government’s crackdown on zero-baht tourism in September last year (story here). The growth rate of Chinese visitors for 2016 was down from 35 per cent to 11 per cent. However, the impact from the new enforcement is expected to soften in early 2017 with more Chinese travelers arriving during Chinese New Year.

Another key market issue is the influx of Airbnb and residential products now competing in the hotel space.

“There has been a significant change in the Department of Tourism and Sports’ revised hotel supply data to include both registered and unregistered tourist accommodations in late 2016, with Phuket now showing a total of 81,727 keys in 1,744 establishments,” says C9 Managing Director Bill Barnett.

“This shift demonstrates the Thai government’s focus on addressing the widespread proliferation of unlicensed accommodation, and the provincial administration has issued an ultimatum for illegal hotels to either register or face legal action,” he adds.

The balance between two major source markets ended the year on a positive note as the hotels’ RevPAR rose by 4 per cent, which was propelled by a significant uplift in market-wide occupancy of 6.2 per cent, according to data from STR. Overall, Phuket hotels achieved slightly more than 75 per cent annualized occupancy for the year.

One key highlight of the C9 report is a 10-year perspective on growth in one of Asia’s leading report destinations. Over that period, growth in airlift has been threefold, which is a key catalyst for demand. The island has has been successful in attracting new developments with more brand-affiliated properties.

Currently, the hotel pipeline has a total of 5,495 keys in 32 new hotels which are expected to come on stream by 2020.

Readers wishing to have the report in print will find a copy in the February 4-10 issue of the Phuket Gazette, available now on newsstands island wide.

Two killed by electrocution in Phuket