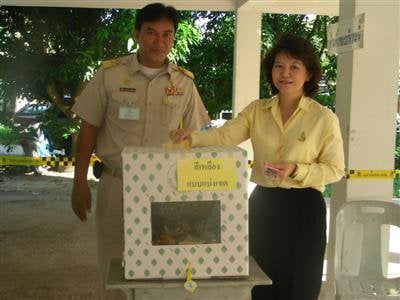 PHUKET CITY: On a day when over 74% of registered voters in the province made it to the polls, official results from yesteday’s general election saw Democrat Party candidates Rewat Areerob and Tossaporn Thepabutr winning both of Phuket’s two constituency MP seats by huge margins.

Also, two-time constituency MP Chalermlak Kebsup-Democrat will likely return to parliament as a party list MP, as unconfirmed results in party-list voting indicate, she will be one of eight party list MP’s from the Democrat party to represent the southern region under the new proportional representation [party list] system.

Somchart Somnam from the Chart Thai party came in a distant third with 17,252 votes.

Despite a vigorous campaign and an unprecedented support from the island’s Thai-language daily newspaper Siangtai, Palang Prachachon (“People Power”) candidates Dr Sriyada Shinawatra and Wisut Santikul were only able to garner 15,220 and 14,683 votes, respectively, to come in fourth and fifth.