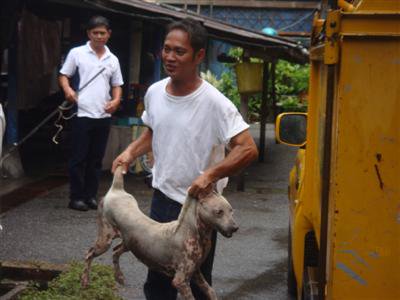 PHUKET CITY: Phuket City vets rounded up a group of vicious stray dogs at a temple today following complaints that the dogs were biting worshipers and killing local cats.

Phuket City Municipality veterinarian Boonsom Roongudom and two helpers took away at least 10 dangerous dogs from the grounds of Wat Langsarn in Phuket City this morning.

The dogs were taken to the Mid-Road Dog Shelter at Bang Khanoon in Tambon Thepkrasattri, where they will be cared for.

Temple volunteer Mr Num said the dogs were intimidating and a real nuisance.

“They were stealing people’s shoes while they were in the temple. I’ve even been bitten,” he said.

Ms Nid, another volunteer, said she once saw a group of 10 dogs ripping a cat to shreds on the temple grounds.

“It was terrible,” she said. “Every morning we were finding dead cats. Those dogs were so scary.”

More than 60 people come to the temple every night to meditate and practice Buddhism, but they are disturbed by the barking and howling of the dogs, she said.

There were more than 100 stray dogs living at Wat Langsarn, with the 10 removed today causing most of the problems, Ms Nid said.

“People come to the temple to feed the dogs without knowing all the problems they cause,” she said.

“I can’t tell them to stop feeding them, but this is not a good way to help stray dogs,” she added.

Many Thais dump puppies and other unwanted pets at temples, expecting they will be cared for by monks and temple staff.

All of the canine activity at temples sometimes boils over into human-on-human violence, such as the case in April 2006 when a Phuket monk beat an elderly dog lover over the head with a stick, leaving him requiring 40 stitches.

The man had refused to clean up dog feces, as ordered by the monk.

Asean summit venue to be finalized on Monday