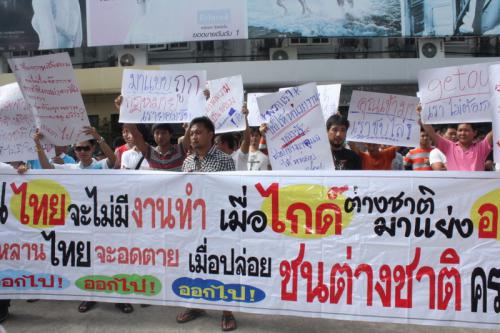 PHUKET: About 100 Chinese-speaking Phuket tour guides protested in front of a travel company yesterday, alleging that the company was hiring illegal Chinese guides.

Chaifu Saelee, 43, led the protesters to Tranlee Travel Co Ltd in Phuket Town, where they met with Kritchakorn Roongmongkolnam, the Managing Director of the company.

The protest follows the arrest of three Thai guides for the assault on Sunday of a Chinese guide employed by Mr Kritchakorn (story here).

The protesting Thai guides carried a sign which said, “Thai people don’t have jobs because illegal guides are stealing their jobs. Our descendants will have nothing to eat if foreigners govern the country.”

“First of all, this job is reserved by law for Thais. Secondly, Chinese guides may be able to speak Chinese well, but they don’t have enough cultural information to correctly inform tourists. We believe they give tourists incorrect information,” Mr Chaifu said.

“I want the police to crackdown on this as soon as possible,” he said.

Mr Chaifu called for a similar crackdown at a protest last April when he and 200 Chinese-speaking Thai tour guides filed a complaint with the governor (story here).

Mr Kritchakorn, meanwhile, stated that the protesters had sent “a big man” to ask Ta Leng, the employee who had been attacked, to withdraw his complaint.

“But I don’t want him to,” Mr Kritchakorn said. “I think people who are attacked have the right to file a complaint.

“After that, I was warned that the guides would protest in front of my company,” Mr Kritchakorn said.

“If these protesters want me to hire more Thai guides, fine, I can do that. Right now, I have 186 Thai guides and 20 translators working in my company. We are getting more and more Chinese tourists coming here on tour packages, so I have no problem hiring more guides,” he said.

PIMEX boat show primed and ready to launch this morning