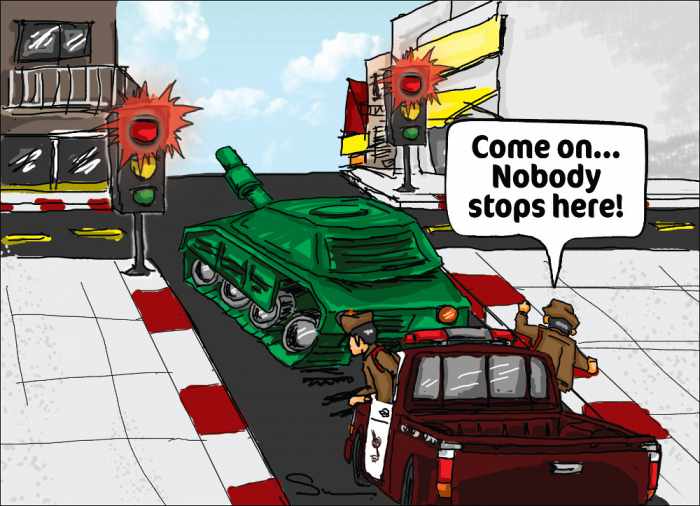 PHUKET: Recent developments on our roads seem to indicate that the law enforcement campaign ordered by the National Council for Peace and Order (NCPO) may be pushing up against a serious limit: Thai society’s deeply ingrained “culture of carelessness”.

The past week in Phuket has seen an unprecedented spate of high-speed vehicle tragedies resulting in deaths, serious injuries and property damage, not to mention the collateral psychological toll on the families and friends of the victims (story here).

There is likely little or no statistical correlation between this upsurge and the NCPO’s efforts to somehow “impose” a safer, more civil society in Thailand.

Misperceptions that the two might somehow be related are akin to thinking that travel by commercial airlines has suddenly become less safe because there has been a spike in commercial airline crashes – and one unprecedented disappearance – around the world in recent months.

As anyone who has a basic understanding of statistics should know, it is only when a new causal factor linking multiple events is identified that alarm bells should go off – otherwise any statistical reckoning should look at the long-term “big picture”.

That said, and at the risk of being anecdotal, the upsurge in road accidents in Phuket reminds this editorial writer of an experience in Bangkok during the 1992 Black May protests.

As the writer was walking south down a nearly deserted Paholyothin Road, a column of tanks, presumably dispatched from the nearby Sanam Pao Military Camp, was approaching the Victory Monument when the traffic light in front of them turned red.

Suddenly, the thunderous roar of the caterpillar tracks on the city streets came to an abrupt halt, the entire column stopping in unison to obey the signal. A surreal silence ensued. It lasted until the light turned green and the formation was back in uniform motion, destination unknown.

What made this occurrence so memorable was the irony that the witness had never seen drivers obey that light, unless there happened to be a police officer standing there to ensure they did.

Twenty-two years and two military coups later, it appears that little has changed, at least where road safety is concerned. Drivers continue to take any number of ill-advised risks, from running red lights and speeding to driving while impaired – or, to put it bluntly, “driving while stupid”.

With all that in mind, drivers of any and all conveyances must remember that taking a vehicle onto Phuket’s roads is a bit like going into battle: there is always risk and you can never be too defensive.
Perhaps we all need to think a little more like that tank driver.

Playing the role of manager and mum in Phuket