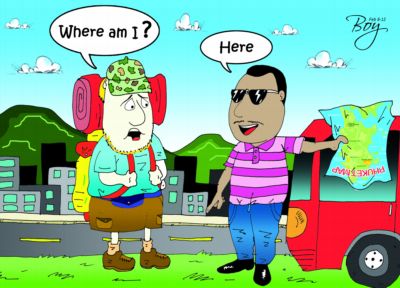 PHUKET: Over the past century, mankind has made astonishing progress in understanding the nature of the universe, but it seems technological advances have now outstripped the ability of many of us to put them to the best possible use.

One good example is in the field of cartography. Maps produced with painstaking effort and considerable risk a century ago, pale in comparison to the wealth of geographic information available to us today.

Global positioning satellites, lasers, computer technology, the internet and scores of other advances have literally put the world at our fingertips – at least for those of us who know where to look.

Few places should stand to benefit more from such advances than Phuket, which annually plays host to millions of visitors who need to get their bearings and who naturally turn to maps for help.

Some excellent printed maps of Phuket are available, such as the English-language ‘Streets of Phuket’ by Image Asia. Yet so scant is the interest in maps among most people in Phuket that the company feels there is insufficient interest to launch a Thai version, even though most of the heavy lifting by the publisher has already been done.

The truth is that the vast majority of Phuket residents continue to grope in the dark, unable to read simple maps well enough to make their own lives easier, let alone to help foreign visitors.

It’s quite common in Phuket to see tourists at roadside carefully studying a free map (collected from the airport), with a local person trying to assist – in vain because he or she lacks the required map-reading skills.

The scenario is reminiscent of the American hillbilly reply to the question: “How do you get to….?” Answer: “You can’t get there from here.”

How difficult can it be to read a map? And why is it that there is apparently no interest in either teaching or learning it?

The failure of the Thai school system, including some of its most prestigious institutions, to get students to master basic map-reading is a national scandal that gets little, if any, attention.

It would be impossible to estimate the number of man-hours wasted as a result. Anyone, Thai or foreign, who has ever found himself lost on the road in an unfamiliar town knows how time consuming and, ultimately, futile it is to ask a resident how to get from ‘here’ to anywhere else. This is not a language problem, but rather a reluctance to deal with an abstract, as the map is not the territory.

So not only hapless tourists but also legions of indigenous ‘map illiterates’ spend countless hours driving around in circles, all the while emitting greenhouse gases and hoping that serendipity or divine intervention will somehow get them to their destination.

Taxi drivers and others in the public transport sector here are often as map-averse as the general public. The bulk of them, it seems, don’t know the names of the roads they use almost every day. And for navigation they depend on a vague set of mental landmarks and instructions from passengers, many of whom are on the island for the first time.

The resulting confusion, and the violence that sometimes ensues, is just another manifestation of the lugubrious state of public transport in Phuket.

Phuket Opinion: Great news for Phuket and our football team