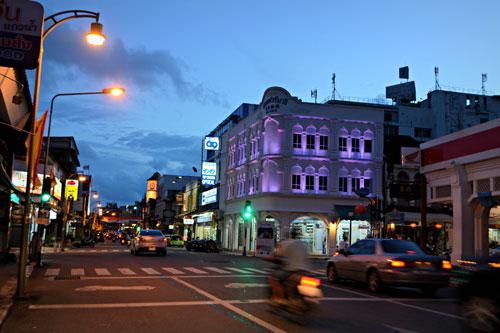 PHUKET: Approaching Phuket Town from the north at dusk provides a magical moment. At the intersection of Thepkasattri and Thalang Roads, the ivory-white Song Nuan Pharmacy building is cinematically lit with colors that manage to stay just on the right side of garish.

Every time I pass it on my daily two-wheeled commute home, and then proceed through streets lined with elegantly crumbling Sino-Portuguese and Peranakan shophouse architecture, I’m reminded that Phuket Town is possibly the most marvelous World Heritage Cultural Site that is not actually on Unesco’s official lineup of such sites.

Phuket Town made a bid to get on that list in 2011, but failed the audition after a team of International Council on Monuments and Sites (Icomos) officials decided that the historic core of our provincial capital didn’t tick all the requisite boxes.

Nevertheless, Phuket Town is one of three shimmering pearls of historic interest on the west coast of the Malay-Thai peninsula, and no less rich in heritage – or potentially aesthetically pleasing – than Penang’s Georgetown and Melaka, 360km and 790km to the south respectively, as the Andaman sea eagle flies.

The omission of Phuket Town from the list seems like a glaring anomaly. Redressing it could deliver considerable gains to three Asean neighbors. Unesco World Heritage status would enhance a 950km heritage trail from Phuket Town to the Peranakan hub of Singapore, thereby yielding tourism revenue and associated synergies along a legendary trading route.

World Heritage status would bring considerable benefits to the island’s southeast corner. Funds from the World Heritage Trust would be made available for restoration work and an increased influx of tourists could be expected. This would be most welcome, for as many business owners in town have noted, this year’s low season has been very low indeed.

So – why not address Icomos’ reservations and concerns and then re-apply? The most obvious first step would be to continue burying all the electrical cabling that wrecks the town center’s photogenic promise. A Herculean task, but we’re only talking about half a dozen otherwise picture-perfect streets.

Another imperative step would be for the Kingdom to desist from its periodic threats to withdraw from the Unesco World Heritage Convention.

Above all, it’s high time Phuket Town received recognition for its rich culture and history.