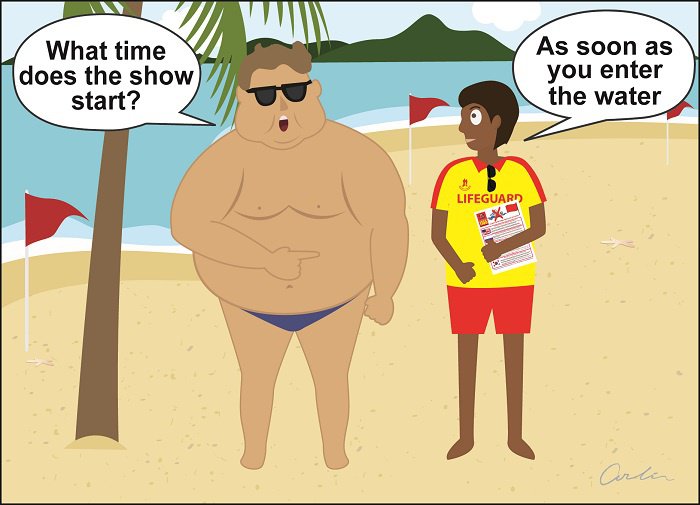 PHUKET: Kudos to Phuket Tourist Police volunteer Simon Luttrell for providing lifeguards with multi-language warning cards to help keep foreign tourists out of the surf in dangerous conditions. His generous action, though, raises the question of why local authorities and tourism agencies did not take similar action years ago.

The cards (story here) address one of the key reasons why so many tourists drown at Phuket’s west coast beaches every year: many are simply unaware of the dangers of the surf, especially the treacherous rip currents that form during the southwest monsoon season from May through October.

An effective, flag-based warning system has been in place for years at popular beaches and the lifeguards posted there rack up an impressive number of rescues annually, yet the death toll remains unacceptably high.

It is hard not to feel sorry for the lifeguards, who find themselves in a never-ending series of frustrating encounters with tourists who either do not understand the risks involved – or rate their aquatic abilities too highly, all too often with fatal results.

In the case of the latter – typically Russian-speaking tourists, according to lifeguards – nothing short of physical intervention, which the lifeguards do not have authority to take, can keep the overconfident swimmers from taking the plunge. To this, the Gazette urges the Russian honorary consul for Phuket to do more to make Russian tourists aware of the true dangers of rip currents.

The Gazette does, however, understand the frustration tourists must feel after they are told by lifeguards not to enter the surf. After all, what is the point of visiting a beach destination if one is not allowed to swim, body surf and otherwise enjoy the sea?

Additionally, just a few days in places like Patong and Karon can quickly condition tourists to “blow off” strangers who approach them with laminated cards touting everything from time-share opportunities to spectacles involving ping-pong balls.

The Gazette has long championed the idea of having commercial airlines instruct pilots of inbound flights to warn passengers of the dangers during their approach-for-landing announcements, especially during the southwest monsoon season.

Petitions to the management of two of the largest inbound carriers have thus far been unsuccessful. The reply has always been that they would only take action after an order from the Department of Civil Aviation, and that they feared getting into trouble with tourism promotion agencies if they took action.

This is one route the Russian honorary consul could pursue with inbound flights from that region. It couldn’t hurt to try.

Mr Luttrell’s approach to the problem is so sensible and cost-effective that it comes as a real surprise that none of the island’s administrative bodies ever came up with similar approaches.

Opinion: Phuket Tourist Police should be your first call