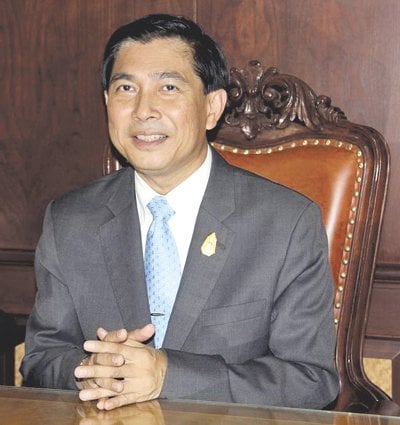 Maitri Inthusut arrived on the island to take up the position of Governor of Phuket on October 8.

With a master’s degree in political science from Thammasat University, he joined the National Security Council, rising to the position of NSC Secretary-General, before taking up the position of Chief Secretary for the Secretariat of the Cabinet. He has also served as Governor for the provinces of Trang and Phayao.

Here, in his inaugural ‘Letter from the Governor’ column for the Phuket Gazette, he identifies his top issues for the island and why they are important for Phuket’s future.

PHUKET: Phuket is a small place, but it bears a huge responsibility. I see seven distinct management issues in Phuket. All are connected and all need fixing.

With the tourism industry growing at 10 per cent per year, the safety of tourists and residents must be our top priority.

Phuket already has more than 2,400 closed-circuit television (CCTV) systems and there are plans to increase that by another 2,000 publicly accessible CCTV systems across the island. Having more CCTV will make people feel safer and help police to arrest criminals.

Another important issue in Phuket is the vast number of complaints over land ownership and the very high price of land. All of these cases are complicated. So far as the business of unlawful issuance of title deeds by officials – well, I’ll being taking care of that. Concerning the matter of land ownership, please understand that the legal process does take time to complete.

The third issue that concerns me is the island’s traffic. We are currently trying to add alternative routes to get around Phuket. The Darasamuth [Central Festival] underpass construction started on Friday, November 23. The next project will be the Tesco Lotus intersection, and by the end of this month we will have selected the project contractor for that project. Following on from those projects are the Bang Khu Intersection and the Klong Koh Pee flyover project.

A mass-transit system is another thing that has my support. This week we are being visited by the Office of Transport and Traffic Policy and Planing. I will use that opportunity to raise the mass-transit project with them.

The next concern on my list is disaster management, man-made or natural. We have projects for flood prevention and we have specialist teams to respond to a variety of disaster scenarios, such as landslides or, as happened recently, a wall collapsing on residential buildings. On that occasion, I put a team together to deal with it.

The fifth risk to be managed is urban growth problems. This includes public safety of locals, tourists and migrant workers. All kinds of environmental issues. such as pollution, overcrowding, waste management and general cleanliness, have to be addressed. Other matters falling into this category that require special attention are the needs of the sea gypsies, local fishermen and the mangrove forests.

My final concern is one of consumer protection, including scams targeting tourists. Phuket has the Damrongtham Center to receive complaints from people and it’s working very well.

What has impressed me during my first seven weeks as governor, is the strong bonds between the private sector, non-governmental organizations and local government. So many good projects that benefit society have been undertaken by this cooperation.

For tourists who intend to visit Phuket, we are all ready to welcome you. Phuket is improving for the better. Soon there will no longer be “tourism low seasons” in Phuket, as you can visit us anytime of the year. Once you’ve visited Phuket, I’m confident that you’ll be impressed and that we will see you again.