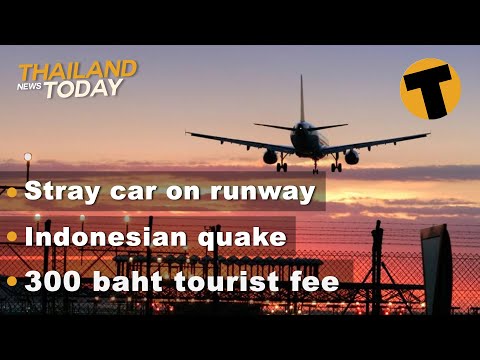 A man has driven his car onto the runway at Bangkok’s Suvarnabhumi Airport while allegedly under the influence of illicit substances. AOT officials are now trying to figure out how the man was able to breach airport security and drive onto the airport runway.

Airport security vehicles were seen escorting the car off the runway, passing by waiting planes. The Airports of Thailand released a statement saying the man was “quickly” apprehended.

Reports say methamphetamine was found in the man’s vehicle. He was arrested on charges of entering a restricted area of an airport, illegal possession of drugs and driving under the influence.

A senior police officer in Koh Samui faces charges for allegedly raping a 21 year old Burmese woman at the Bo Phut Police Station on the island. The officer, who was an investigation squad leader at the station, has been suspended and is now in detention at the Koh Samui Court.

The senior sergeant major allegedly took the woman, who had been arrested on drug charges, out of her cell at around 2am Wednesday and to another room at the Bo Phut Police station where he allegedly sexually abused her. She was then taken back to her cell.

The woman reported the incident to the Myanmar Embassy which then filed a complaint directly with the Bo Phut police chief. The senior officer was immediately suspended. He now faces rape charges and is now in detention.

In another case of police and officials behaving badly…. At least 33 police officers and other government officials are being investigated for their role in the illegal smuggling of migrant workers into Thailand. The people smuggling business is thought to be at the root of Thailand’s second wave of Covid-19, with countless migrants helped across the border without undergoing mandatory quarantine or any form of health checks.

According to the deputy national police chief, at least 33 people are thought to have been involved in smuggling migrant workers over the Thai-Burmese border, in the Sangkhla Buri district of Kanchanaburi. This includes over 20 police officers, with the remainder being state officials. The level of involvement varies, with some turning a blind eye to the people smuggling and others more actively involved.

The government has declared an amnesty for all illegal migrant workers, in the hope it will encourage them to come forward for Covid-19 tests. They will then will be allowed to work in the Kingdom for 2 years. Registration opens today and run until February 13.

The Indonesian island of Sulawesi was shook by a 6.2 magnitude earthquake shortly after midnight today, toppling over buildings and injuring hundreds. Reports are continuously being updated as rescuers search through rubble. As of early this afternoon, at least 34 people have been killed… the toll is expected to rise.

Thousands evacuated their homes in West Sulawesi. Several buildings, including hotels, were severely damaged and many homes were flattened in coastal areas. A hospital was partially damaged and reports say more than a dozen patients and staff were trapped under the rubble.

The area was first hit by a 5.9 magnitude undersea quake yesterday. It damaged several buildings, but no deaths were reported.

A suicide prevention team is being created to help Thai people in despair at this time. The Health Minister, Anutin Charnvirakul, will chair the new committee. The ministries of Social Development and Human Security, Education, and Justice, as well as several other government bodies, will all play a role in the committee’s work.

Anutin says the committee will work to ensure people are aware of their rights and welfare entitlements, as well as trying to help them manage their problems. The team will also screen people considered “at risk”, such as those battling substance addition, people who have previously tried to commit suicide, and those who are suffering with mental illness.

Since 2017, the suicide rate has been on the increase and is particularly prevalent among males, who make up the majority of victims. 2020 figures show that the financial implication of Covid-19 is playing a significant role in deaths by suicide.

Thailand’s Tourism Minister has confirmed a proposal to charge foreign tourists a fee of 300 baht per visit. The fee will be used to develop tourist destinations as well as providing visitors with insurance benefits while in the Kingdom. The proposal has been approved by the National Tourism Policy Committee.

The fee is designed to ensure anyone who gets sick or is injured can receive medical treatment. 34 baht of the 300 baht fee will go towards insurance coverage.

Despite the introduction of the Special Tourist Visa, Thailand has struggled to regain much of its lost international tourism. The mandatory 14-day quarantine is thought to play a large part in people’s reluctance to visit, particularly if paired with quarantine or self-isolation restrictions in their home countries.