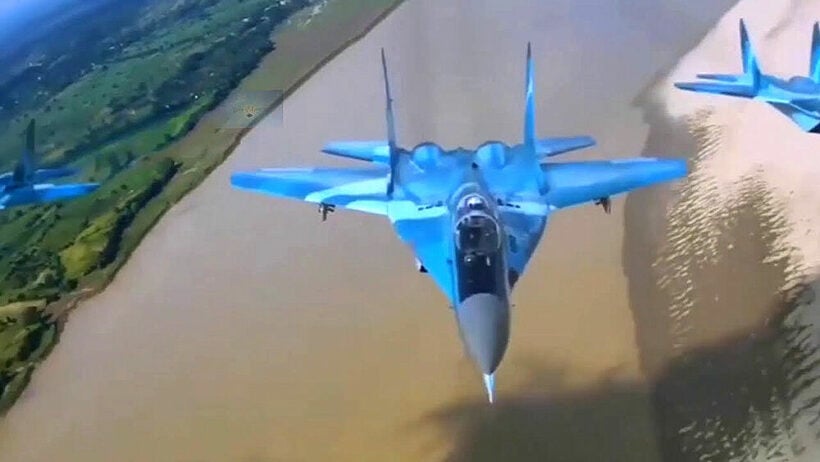 The Royal Thai Air Force sent 2 F-16 fighter jets to inspect Thai airspace after a MiG 29 fighter jet from Myanmar was detected flying over the Prop Phra district in Tak, the northern province of Thailand.

Yesterday, the Royal Thai Airforce reported that an unidentified aircraft was spotted in Thai territorial air space at 11.16am. The plane was later confirmed to be a MiG 29 fighter jet operated by the Burmese military.

The jet was reported to fly about 4-5 kilometres into Thai airspace over Baan Wale Tai and Baan Wale Nue communities in the Prop Phra district of Tak, located across the ongoing battlefield in the Karen State of Myanmar. The aircraft flew around the Thai airspace for about 15 minutes and then proceeded to fire 4 missiles at the anti-governmental groups.

The media reported that Tak locals living in the community were “surprised and frightened,” saying the jets were flying very close to the ground. The schools in the area immediately announced an emergency and urged parents to take their children home. Some locals and students escaped into the schools’ bunkers as a precautionary measure.

Following the ongoing clashes between the Burmese military and anti-government groups in the area, Thai locals said this was the first time that aircraft from Myanmar had intentionally flown into Thai territory.

The Royal Thai Air Force also reported that they’d detected one military helicopter operating near Thailand. It was flying approximately 10 kilometres from the border but there was no incursion into Thai airspace on this occasion.

Some locals and officials noted that the Royal Thai Air Force was late in responding “to protect Thai territory.” Locals told Thai media that the authorities were unable to do anything except “just watch the jets fly in and out of the country.”

But a spokesperson from the Royal Thai Air Force, Prapas Sornjaidee, insists that they “quickly responded to the incident.”

“The unit detected the aircraft flying over Thailand and sent up the F-16 jets from Takhli district in the northern province of Nakhon Sawan within 5-10 minutes.

Prapas added that the Burmese aircraft “didn’t intend to threaten Thailand” at any stage.

“The Royal Thai Air Force had already assigned the Assistant Air Force Attache in the Royal Thai Embassy in Yangon to coordinate with relevant departments in Myanmar to prevent a similar scenario in the future.” ThaiEyes
On 7/1/2022 at 11:39 AM, Pinetree said: You don't just shoot down aircraft because they stray into your airspace, not if you want avoid war for a minor reason.  When I said “treated with hostility”, I meant timely interception and…
HiuMak
Thai Style "Top Gun" remake

Pinetree
13 hours ago, ThaiEyes said: When I said “treated with hostility”, I meant timely interception and if necessary, military force. Myanmar is not a “friendly” country to be buddies with. If these incursions are an issue, they need to regularly…

ThaiEyes
2 hours ago, Pinetree said: Nobody does that with fighter jets, not unless at unsustainable cost in manpower, maintenance and fuel.  Well maybe Thailand could use those submarines it wants so much to get 😂

Pinetree
1 hour ago, ThaiEyes said: Well maybe Thailand could use those submarines it wants so much to get 😂 They don't fly too well, not aerodynamic enough