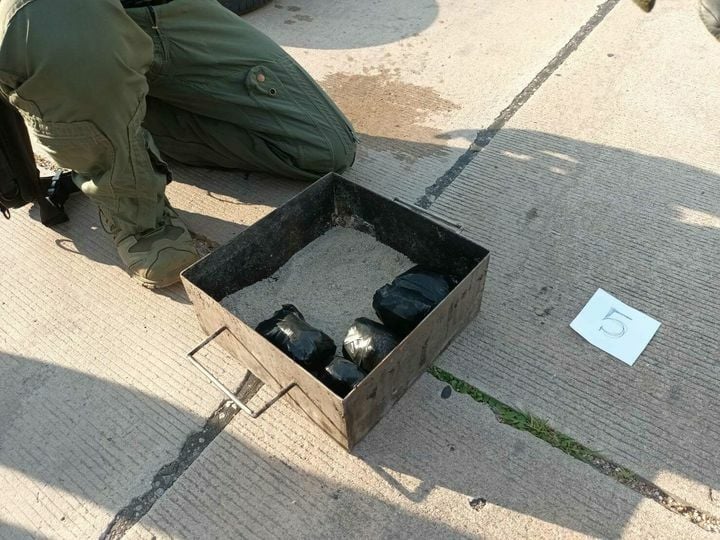 Police have caught the man who allegedly made nine bombs and left them strewn across a main road in Rayong on Tuesday night. One of the bombs exploded and eight were defused by Rayong police on Wednesday. The police used CCTV to figure out the criminal behind the operation, who said he used YouTube to learn how to make the bombs.

Today, an 18 year old man was detained and has confessed to making nine homemade bombs and to leaving them strewn across the four-lane Choeng Noen – Chakok road in Rayong province on Wednesday night.

A local man heard an explosion around midnight on Wednesday and found eight more homemade bombs lying in the road when he went out to look. Rayong’s Explosive Ordnance Disposal team removed the bombs and defused them on Wednesday.

The man put his nine homemade bombs in his backpack and drove on a Honda Dream motorcycle to the scene of the incident. When he got there, he threw a bomb that exploded and tried to make a quick escape, dropping the eight other bombs in the process.

The man is facing two charges: possession of explosives and causing an explosion that is dangerous to others. anarchofarmer
My 10 year old daughter is persistently watching U Tube so it's reassuring to learn that it's not 100% crap but that she might actually learn something useful from it! As a kid in Ireland fireworks were banned so we…

Augratin
Need more investment in public activity centers, neighborhood swimming pools, soccer fields, etc. When kids have nothing constructive to do, they'll find something destructive to do.

Transam
6 minutes ago, Augratin said: Need more investment in public activity centers, neighborhood swimming pools, soccer fields, etc. When kids have nothing constructive to do, they'll find something destructive to do. When I was a kid we had sod all,…
HolyCowCm
In the USA many of us tinkered with fireworks and did fun things with them as in my day we as kids were always up to many outdoor shennanigans we could get into. Yes they may have been a little…