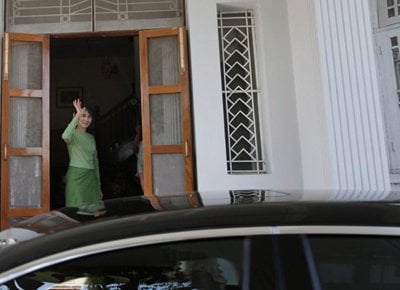 The Nobel Peace Prize winner officially filed to run for the near-rural constituency of Kawhmu, on the outskirts of Rangoon, during the April 1 by-election. Hundreds of supporters of the 66-year-old democracy icon’s National League for Democracy party gathered outside of the commission office, Mizzima News reported.

Observers believe Suu Kyi might be offered a position in health, education of the ethnic affairs area, Mizzima noted. The famed politician spent 15 of the last 21 years under house arrest until her release in November 2010.

Suu Kyi’s political party, the newly-reformed National League for Democracy, will seek seats in up to 48 constituencies throughout the country at various levels of government.

In December, Suu Kyi, responding to fears that her image and reputation would be lessened as a member of Parliament, said: “Some people worry about my reputation if I contest the by-elections. We shouldn’t do politics for our reputation. We have to do what we think we should do. If I think I should, I will compete in the election.”

Myanmar held its first elections in 20 years in November 2010, paving the way for the end of 49 years of military rule. The country has undergone a rapid number of political changes in the past year, including the loosening of press laws, legalizing the right to demonstrate and organize as workers, the release of leading political prisoners, and ethnic cease-fire agreements.

The Karen civil war has been ongoing for more than six decades, forcing generations of Karen to flee to the jungle in fear of their lives. Since the internal conflict began in 1948, an estimated 500,000 people have been killed.

With new found time, ex-British PM enjoys being able to focus on single issues of concern
Phuket Gazette / The Nation

PHUKET: Suthichai Yoon: In your memoir, you said that you enjoyed your new life more than the old life. How is that possible, old life meaning prime minister for 10 years?

Tony Blair: Being prime minister is a huge privilege. “Enjoy” is the wrong word because the pressure is also enormous. And the thing is that you have to deal with everything that comes at you. In my new life, I am able to concentrate on certain things; it might be the Middle East or my faith foundation, African charities, or climate change. I am able to concentrate on certain key issues and the pressures aren’t the same. My new life is probably more enjoyable. But my old life was a privilege.

SY: What is more productive?

TB: It’s productive in a different way. Funny enough, when I was prime minister, I increased our aid to Africa. I trebled it; that’s one impact. But today I work with the governments in Africa to make change. And I also have an impact but it’s different.

SY: Is the sense of satisfaction more now than before?

SY: If you were prime minister now, what would be your advice to the euro-zone leaders in dealing with the debt crisis?

TB: If Europe wants to save the single currency, it’s got to demonstrate that Europe, as a whole, including creditor nations, are 100 per cent committed to standing behind the European currency. If you are not willing to do that, the market will continue to demand very high amounts of money for Italian and Spanish bonds. And in the end, it will become unsustainable. The whole point about the single currency is that it has to correct the essential design flaw that that was there in the original concept when the politics and economics weren’t in alignment.

SY: Are they aligning?

TB: There’s growing alignment in politics and economics. They are taking measures. We’ve come a long way but the time is short. And the situation is critical. It is a very difficult decision, by the way. So I have total sympathy for leaders who take this decision. The risk is they take the decision two months behind the curve. So you constantly take the decisions just when the curve has already moved on.

SY: One step behind the crisis?

SY: Do you think that the German chancellor and French president are really up to the task?

TB: They are both highly capable, very committed people. This is incredibly difficult. The worst thing in politics is when you face these choices. There is no middle way and both choices are ugly. And that’s the situation.

SY: How would you advise them?

SY: Is the bailout package at the moment sufficient?

TB: Not if people think there’s a limit to how far you are prepared to go. If you hold Italian bonds and you think there’s any prospect of the bonds not being honored, you are going to demand a high premium. The difference between the US and Europe is that for the central bank, in the end, they can stand by their currency. It’s not possible to walk out. There is a long-term question that Germany is rightly focusing on, which is to do with reforming the European structure, in my view. These are long term issues. In the short term, people need to know that Europe is behind this currency. If they believe there is any gap in that commitment, even small gap, you have trouble.

SY: Since you left office five years ago, has the world become a less dangerous place?

TB: It has not become a less dangerous place. My view of this is, you’ve got the basic question on security, which is the question about radical Islam. It is a long-term issue that will take generations to defeat. It requires security to deal with. My view of this, to which some disagree strongly, is that we’ve got the basic question on security terms. The question about Islamic extremism will take a generation to deal with. This not a short term fix. It requires security measures and, on the other hand, it requires us to realise that it’s part of the religious problem. And you’ve got to deal with it.

SY: Is it a security or religious problem?

TB: It’s combined – the underlying root of this lies in a perversion of it. People engage in this, believing that they deal with religion. People find religion a difficult issue in politics. So, people want to say it’s a religions issue not politics. You can say that. So, if you don’t deal with the religious aspect, you don’t deal with the issue. Extremists are prepared to use terrorist measures