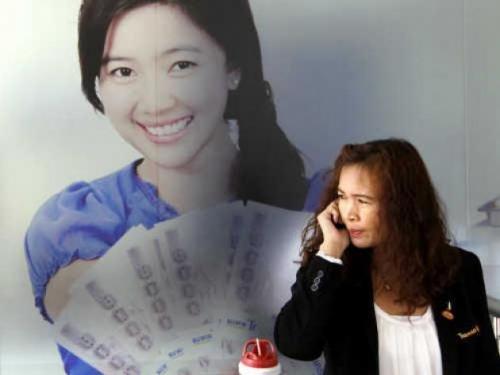 Baht further slides against US$
The Nation / Phuket Gazette

PHUKET: Falling to a one-year low yesterday at 31.82, the baht has suffered from depreciation against the US dollar along with most emerging-market currencies.

Foreign investors are pulling money out of developing economies amid speculation that the US Federal Reserve will pare stimulus that has fuelled demand for emerging-market assets.

Investors pulled US$8.4 billion from developing-nation exchange-traded funds this year as economies from Indonesia to India weakened while the Fed is pulling out of its quantitative-easing programme. At press time, the Federal Open Market Committee’s minutes of its July meeting had not yet been published. A Bloomberg survey of economists found that 65 per cent of respondents predicted the Fed would taper bond purchases next month.

“Basically, sentiment for emerging-market assets is weak due to speculation about the Fed’s tapering,” Tsutomu Soma, a manager of the fixed-income business unit at Rakuten Securities, Inc in Tokyo, told Bloomberg. “Funds are flowing out from emerging markets. On top of that, Thailand’s growth concerns are adding downward pressure.”

A day after the National Economic and Social Development Board announced the second-quarter economic data on Monday, the baht fell from 31.20 to 31.53. The currency yesterday dropped 0.5 per cent to 31.82 per dollar as of 3.41pm in Bangkok after touching 31.83 earlier, the weakest level since July 2012, according to data compiled by Bloomberg.

Elsewhere, the plunge for some currencies has been steep.

India’s ailing rupee hit a new record low yesterday after the central bank’s plans to inject 80 billion rupees into financial markets failed to calm investor jitters. The rupee, the worst-performing Asian currency this year, fell to 64.60 to the dollar (2.02 per baht) in late-afternoon trade, down from its previous all-time low of 64.13 reached on Tuesday.

The Brazilian real has fallen by a similar amount, hitting 2.4282 to the dollar (7.34 to Bt100), a rate unseen since March 2009. On Tuesday, it dipped to the lowest level in four years, hurt by market expectations of higher US interest rates. On Monday, the Brazilian currency closed at 2.4169 to the greenback, trading above the 2.4 mark for the first time since March 3, 2009.

The Turkish lira has fallen by around 10 per cent since a February peak. The central bank on Tuesday unexpectedly raised its overnight lending rate by 50 basis points to 7.75 per cent.

PHUKET: The bedlam in Parliament on Tuesday while discussing a constitutional amendment has drawn heavy public disapproval and media criticism, as ugly scenes of pushing and shoving between protesting MPs and policemen amid screams and inflammatory comments were a reminder of similar chaos last May.

However, many consider the filibuster tactic employed by the opposition as acceptable. The Democrats put up strong opposition to a crucial amendment, which would potentially decide that all future senators must be elected. Scrutinising important amendments in early stages in a row with other key bills proved to be perhaps a wrong decision by the Pheu Thai-led coalition and the government whip. They agreed to allow this bill to be put higher up on the agenda reportedly after heavy lobbying by elected senators, whose terms will end next March.

A senior Pheu Thai source said all the senators, especially those elected who are friendlier to Pheu Thai, wanted to know their future as soon as possible. They offered to support any future bills or amendments proposed by the Pheu Thai-led government if this amendment was taken up early. “If they can run in a future general election after the amendment is complete, Pheu Thai anticipates support from up to 70 [Pheu Thai-friendly] senators in return, from all 150 senators,” the source added.

The amendment contains several conditions in favour of elected senators, especially on allowing their spouses, family members or relatives, or those of any politician, to run in a future senatorial election. However, the 73 appointed senators whose terms will end in the next three years, and who are not allies of Pheu Thai, disagree with these conditions, and strongly oppose this amendment along with the opposition Democrats.

Core Pheu Thai leaders originally agreed that the 2014 Budget Bill and a borrowing bill for Bt2 trillion for infrastructure projects be a priority, but underestimated the Democrat Party’s stance on this. “We did not think the Democrats would use such tactics to disrupt the debate on the senator-related amendment, which should have taken one or two days, so we agreed to put it higher up on the agenda, the source said.

The Pheu Thai-led government put important bills and amendments in a tight order on the agenda: the controversial amnesty bill on August 7; the 2014 Budget Bill on August 14, which has been halted and would be discussed again on August 23; and the senator-related amendment on Tuesday.

Pheu Thai MP Udomdej Rattanasathian, an adviser to the government whip, echoed the source’s account on the lobbying by the elected senators. He said Pheu Thai might allow the Democrats and appointed senators to debate against the amendment for another day today, and possibly again next week.

Chaiyan Chaiyaporn, a lecturer on political science, said filibuster – a technique by minority MPs used to stall issues they are opposed to – was a rightful tactic and widely practised in parliaments worldwide. He said both Parliament President Somsak Kiatsuranont and Senate Speaker Nikom Wairatpanij, as the presiding speaker, lacked knowledge about such a practice and skills to maintain order.

Another lecturer, Pornsant Liangbunlertchai, said he considered the “tyranny of minority” more worrying in than chaos. While not defining the phrase coined by him, he said “political play without conscientious care” would affect the functioning of the legislative branch as a whole.

Somsak, who chatted jokingly with reporters, said he was “a bit bored” with the commotion during Monday’s session, apart from “being a bit tired”, but “did not have a headache”.

Opposition whip chief, Democrat MP Jurin Laksanawisit, said what had disgraced Parliament was not the protests by the Democrats but the deployment of a company of riot policemen near Parliament, which he said was an intimidation of lawmakers.