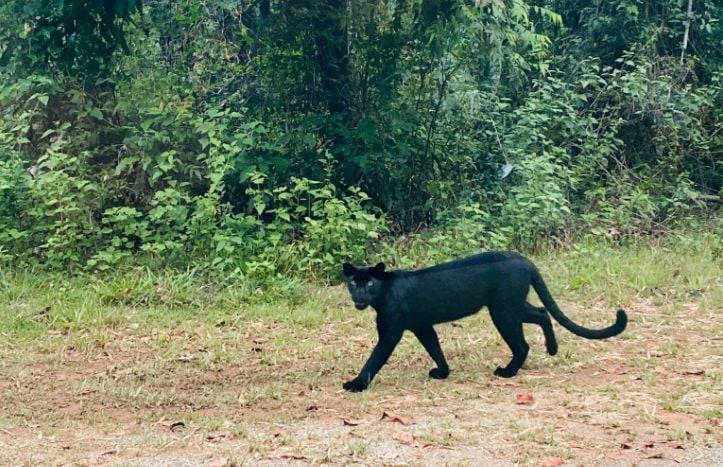 A Thai tourist wrote about her encounter with an endangered black panther at a national park in Phetchaburi province in central Thailand on social media yesterday. The woman videoed the black panther rolling around on its back like a domestic house cat in the rare sighting.

“We saw a black shadow drinking water in the middle of the road so we slowed down the car to get a proper look… and discovered it was a black panther… I got goosebumps… I was so shocked.”

Park rangers told her she was very lucky indeed because sightings of the elusive black panther are extremely rare. It is estimated that there are only 200 black panthers – or Indochinese leopards – left in the wild in Thailand.

Premchai got away with the crime for four years, so political artists called for justice for the slain black panther through murals. Graffiti artist Headache Stencil spray painted a mural of a black panther with a ‘mute’ symbol next to it on a wall on Sukhumvit Soi 41 in Bangkok, which was mysteriously covered up with white paint within 24 hours of it being posted on social media. The mural suggested the black panther’s calls for justice had been silenced by Thailand’s justice system, because Premchai got away with the crime for so long.

Thai graffiti artist Mue Bon also painted a mural of the black panther on a wall in Melbourne, Australia, to bring the case into the international public eye.

Public outrage at Premchai’s crime – the former president of Italian-Thai Development Plc – finally amounted to a prison sentence in December 2021 when the court sentenced Premchai to three years and two months in prison for illegally hunting wildlife.

Fanta
Thankfully this one wasn’t spotted on a barbecue.

palooka
13 minutes ago, Fanta said: Thankfully this one wasn’t spotted on a barbecue. Probably hoards of poachers on their way there now, but doubt there will be much left to BBQ, black market are probably bidding for all bits of…
Mandy
Sometimes when you see something as beautiful and rare as this, you should keep it to yourself!

Marble-eye
Kenyan wildlife officials were called when a lion was spotted in the bushes at a homestead only to find it was a plastic shopping bag. https://www.bbc.com/news/world-africa-61335539

Thailand News Today | Underwear thief on the loose in Chonburi!