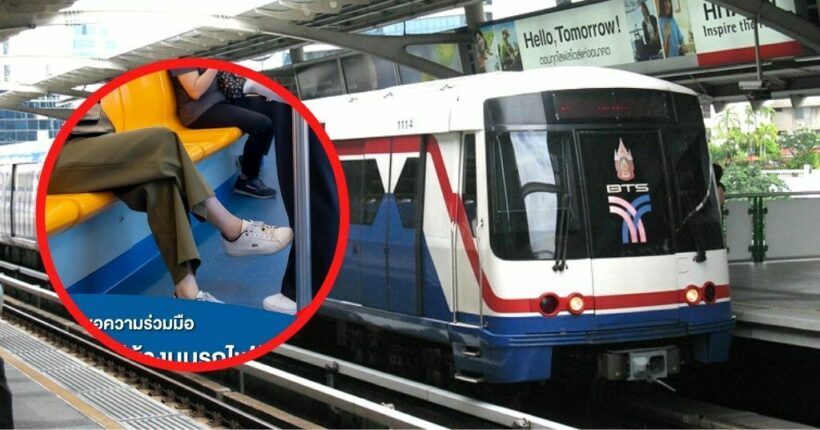 Tons of comments from Thai netizens suggested that the company should announce the warning on the train, instead of the reminder to wear a face mask every minute.

The post went viral on Thai social media, getting more than 3.5K reactions on Facebook. Some Thai netizens shared their experiences about people annoyingly crossing their legs on the BTS in the comments. Others commented about other things that annoy them on the BTS, such as people cutting in line, leaning on the poles, listening to music too loudly and sitting over two seats.

Many Thai people urged the BTS to announce this warning directly on the train, because they were getting annoyed daily at people crossing their legs.

Apparently ‘manspreading’ is OK in this case where men, only some men, are known to sprawl on a seat spreading their legs… but DON’T cross them!

palooka
WOW at my age I think I need to totally avoid BTS unless I have a Resus team on hand.
Vigo
Having used BTS, some of the people crossing their legs are flip flop wearers who have really dirty feet. Others have their feet touching others. In Thailand touching people with your feet is offensive.
HiuMak
I have no problems standing in between their crossed legs.😀
ThomasG
They act like it's something new that people have feet, Jesus Christ, talking about making a problem out of nothing.. Why don't they prohibit people using their phones as well? When they hold up their phone in front of them,…
DiJoDavO
"Others commented about other things that annoy them on the BTS, such as people cutting in line, leaning on the poles, listening to music too loudly and sitting over two seats." First of all, if you are annoyed by a…