Phra Taweelert Raktaweesin, the Deputy Abbot of Wat Klong Son in Krabi, is calling for justice after being accused of having a sexual relationship with women – an accusation he is denying.

Nong Talay patrol police, together with local media, inspected the famous temple of the district today (February 13) after receiving reports from locals that the monk has had sexual relationship with women.

The 54 year old Deputy Abbot brought the police and media to visit his room and other rooms across the temple to indicate his transparency and desire to work with authorities over the matter.

“There are 2 monks staying permanently at this temple and there is one monk and one nun who are staying temporarily right now. There’s a rumor that I brought women to stay in my room and it’s not true. There are only few women who visit the temple daily to help out with tasks in the temple and they always leave in the late afternoon,” said the Deputy Abbot.

“The person who has spread this rumor wants to destroy my reputation and wants me to get out of the temple. I have been shot at twice whilst resting in my room but the gun has misfired.

“Nowadays, I live in the temple more carefully. I insist that I have never had sexual relationship with any woman and I want justice. Anyone is welcome to inspect the temple and my rooms.”

The police, following the visit, say they found nothing suspicious during their inspection or any woman’s belongings in any rooms of the temple. 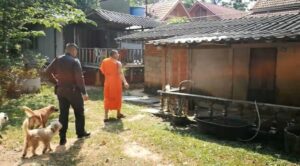 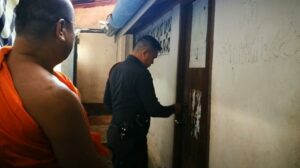