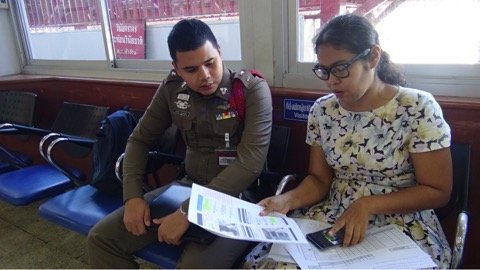 Manager Online is reporting that a Hua Hin taxi driver will appear in court after he is alleged to have attacked a Khao Takiab  receptionist at a taxi rank last Saturday.

The hotel receptionist, Sasiwimon Srikham, suffered five stitches in her head and mouth wounds after she was attacked while walking by the rank in Khao Takiab.

The police have released the taxi driver after he admitted to the attack.

But Manager Online is reporting that he was the same man caught in a video clip threatening a Grab taxi driver for coming to Hua Hin to pick up passengers.

The victim has also asked police to press defamation charges after she alleged that two women went on a TV show and made defamatory comments about her.

“Kong” has allegedly admitted everything to police and was released pending a court date for intentional assault.

The man had promised not to commit any more harassment of the victim on Facebook.

Sasiwimon said she was feeling better now both physically and mentally after hearing the driver’s apology.

But she confirmed that she’s spoken to police about the defamation charges against the two unnamed women who had gone on TV and caused damage to her reputation.