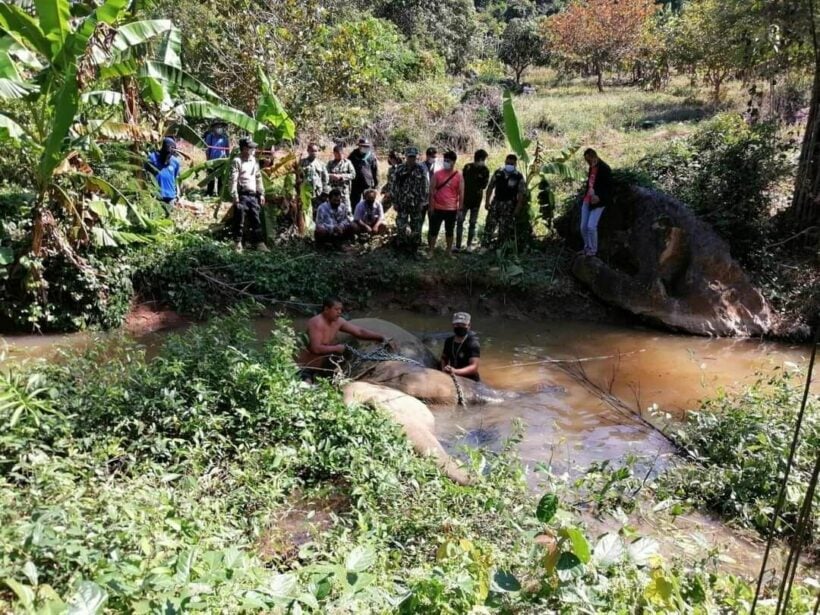 Police arrested a man who allegedly shot and killed a 25 year old pregnant elephant in Chon Buri. The man reportedly claimed that the elephant came to eat bananas on his land and he shot her because she was about to chase him.

The police have filed two charges against the suspect for possessing a firearm and killing a protected animal. Park authorities discovered the body of a 25 year old pregnant elephant with several gunshot wounds outside a wildlife reserve yesterday after villagers reported the mammal’s remains, which was believed to have been killed at dawn on Saturday.

Pitak says the elephant was shot with nine rounds in the head and neck. He added its tusks were removed and sent to the Khao Ang Rue Nai Wildlife Sanctuary in Chachoengsao, while its corpse was interred inside the park.

Conflicts between villagers and elephants are becoming more common in the eastern forest complex as elephants flee the forests surrounding residential areas in search of food, causing crop and land damage as well as lethal attacks.

The complex, which is home to 323 elephants, is 1.3 million rai, but 470 of them are believed to dwell in the vicinity, and many of them go out looking for food.

The elephant population in the country is rising at an annual rate of 8%, according to the Department of National Parks, Wildlife and Plant Conservation (DNP), with 3,168–3,440 wild elephants in 69 national parks and forest reserves.

RampantRabbit
no worries mate, when in court make sure you fatten yerself right up, stick a patch on one eye and walk with a limp, youll be free in no time
Jason
This is a sad situation all round. Elephants need to be protected but so does a farmer's livelihood. There is a middle ground there somewhere. It doesn't involve shooting an elephant and it doesn't involve destroying farms.

whitesnake
f*** THE FARMER!! I hope he rots in Thai hell!!

Cheers! Alcohol sales at approved venues allowed until 1am during New Year holiday