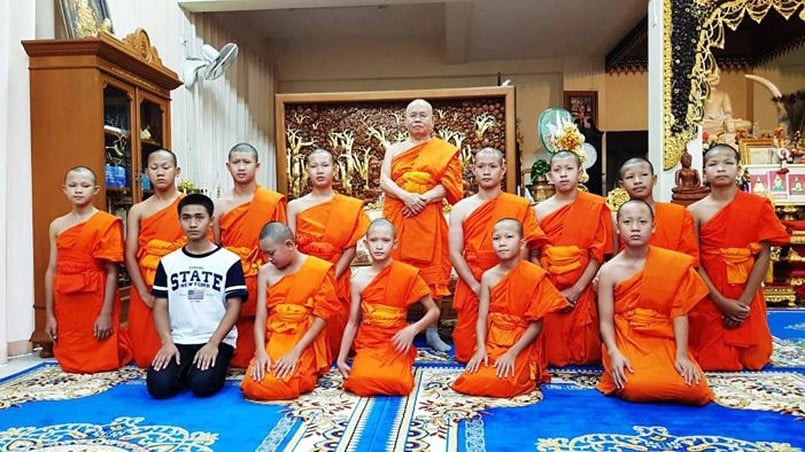 A provincial committee is being set up to screen approaches made to the 12 Mu Pa football players and their coach to attend various events and activities.

Chiang Rai’s new Governor Prajon Pratsakul was speaking to reporters after the team made a courtesy call on him. They were accompanied by Phra Khru Prayut Jetiyanukarn, acting abbot of Wat Phra That Doi Wao in Chiang Rai’s Mae Sai district.

The governor said he asked the 11 novices to return to their classrooms and concentrate on their study and try to live a normal life. A provincial committee will also be set up to give them advice and help with the screening process.

Meanwhile, 11 of the team completed their nine-day ordination as Buddhist novices this morning. During the time they made merit for their hero, an ex-Navy Seal who died during their rescue from the Tham Luang cave in Chiang Rai. 14 year old footballer Adul Samon, who spoke in English to the British divers when the group was discovered, is a Christian so didn’t attend the ordination.

Their 25 year old coach didn’t leave his monkhood today, deciding to instead remain ordained throughout the three month Buddhist Lent. The 12 chose to be ordained to make merit for 38 year old Lt-Commander Saman Kunan who died in the cave on his way back from delivering oxygen tanks to the Mu Pa team.

The miracle at Tham Luang Caves

4.8 million meth pills and nearly a tonne of ‘ice’ seized in Chiang Rai