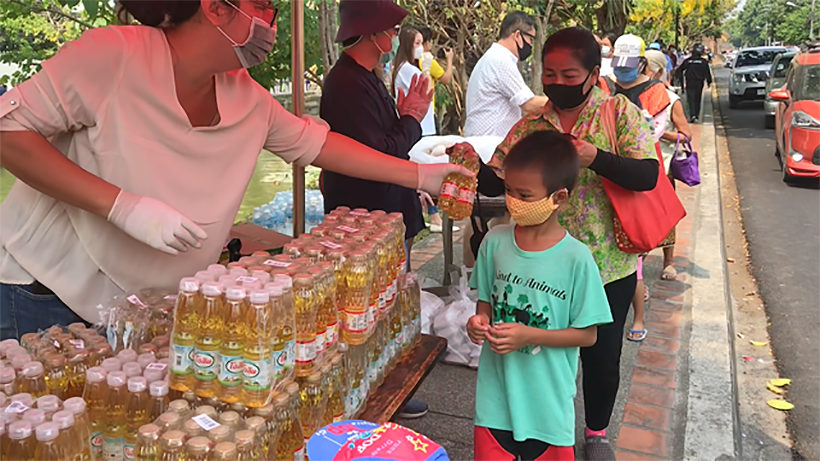 There was a group of Chiang Mai city volunteers who published a donation point to receive offerings that are serving the dual purpose of helping impoverished victims of the Covid-19 pandemic and letting the goodness of this year’s otherwise-non-existant Songkran festival shine through. The response, from donators and recipients has been phenomenal.

Over the last week the queues running around the moat from the Chinese consulate on the outer moat and to the inner moat near the Tha Pae Gate, have continued to grow. Goods donated included rice, noodles, water, cooking oil, canned fish, eggs and boxes of prepared food. There’s a queue of people wanting to donate and an even longer queue of people waiting patiently for a hand-out. Yesterday the queue ran 2 kilometres.

This centre has now been distributing food for six days.

One of the people involved in the project is 43 year old Montchai Chaisom. He’s been standing under the Chiang Mai sun for nearly a week accepting people’s donations.

“We saw that there were lines of people waiting for food at Tha Pae Gate, so it wanted us to do something to help.  My friends and I therefore thought that we needed to go onto Facebook and get the word out.”

On the first day Montchai and other volunteers distributed 500 bags of rice and many dozen eggs. It just grew from there.

“We thought we would do this for only seven days, and tomorrow is our last day, but today the queue is so long.”

Initially this project was funded by Montchai and his friends, but they have now opened up to the public to help support the costs. Montchai says it’s currently costing 20,000+ baht per day to supplement the donations and meet the demand.

Montchai said that if anyone would like his group to continue doing what they are doing, then they are welcome to donate towards the efforts… 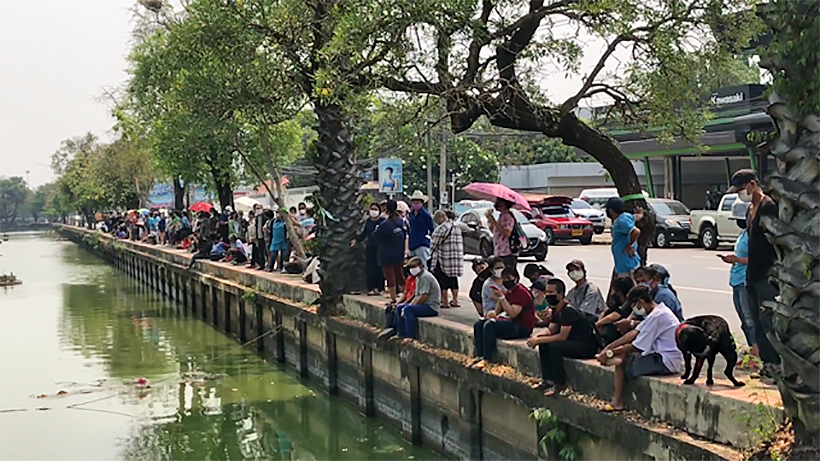