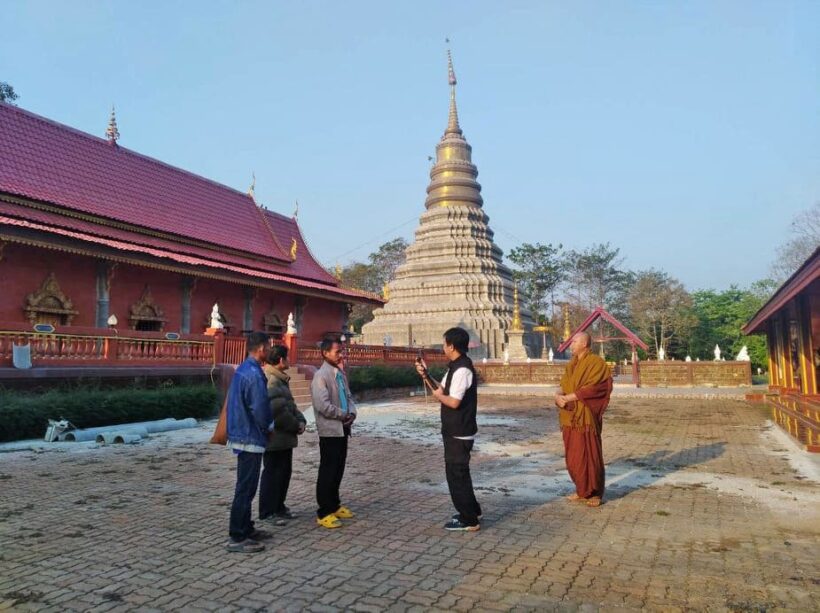 The recent tremors around Lampang slightly damaged a few dozen homes in six tambons, including the tiered umbrella of the Wat Phra Kerd pagoda in tambon Thung Hua.

Luckily the 25+ quakes and aftershocks in Lampang’s Wang Nua district on Wednesday and yesterday didn’t cause too much damage. But academics remain concerned about the North, as it has several faultlines scattered across the region.

Penneung Wanichchai, seismologist at the Asian Institute of Technology, who has served as head of the Thailand Research Fund’s quake-disaster prevention project, said that in theory, a 4.9 magnitude quake can be dangerous.

He says that the Phayao faultline should not be blamed for the Lampang quakes.

“In reality there are many more faultlines under the earth’s surface. These quakes may have stemmed from other faultlines. We may be worried about residents living near visible faultlines, but I’m worried about the entire region.”

“There can be a quake at any time, as seen in the May 5, 2014 earthquake in Chiang Rai. The Lampang quakes have made us realise that quakes can happen any where, so people should be aware,” Penneung said. 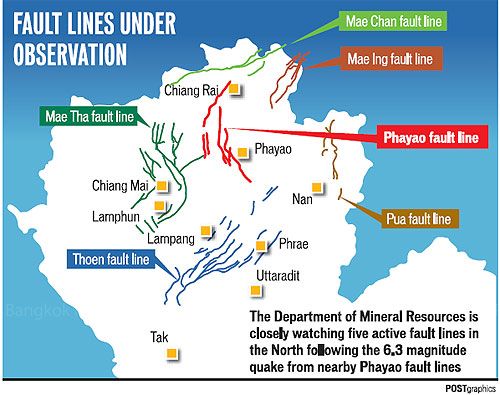 “Houses should be reinforced with metal and larger pillars,” he said, adding this team had reinforced four school buildings and were currently working on another four.

He says the government should add another 15 percent to the budget for constructing state buildings – especially schools and hospitals – so they could be suitable reinforced.

The Thai Meteorological Department’s Earthquake Observation Division has blamed the quakes on the Phayao faultline, which passes through Phayao, Lampang and Chiang Rai provinces.

So far, the 4.9-magnitude quake at 4.05pm on Wednesday in Lampang’s Wang Nua district was the biggest, while the latest 2.6-magnitude aftershock occurred at 6.07am yesterday, the centre said.

Teraphan Ornthammarath, who leads the TRF project for mapping out quake-risk areas in Thailand, said that though the Lampang earthquakes did not cause much damage, people should still stay out of risky buildings in case there are more violent aftershocks.

Citing the inspection of damages in Lampang’s tambon Thung Hua, he said the tambon administrative organisation’s building only suffered cracks in the wall, while the pillars and beams were unaffected. He said only one house in the tambon was coded “red”, as the metal interiors of a pillar had been exposed.

The Lampang quakes could be felt in the provinces of Chiang Mai, Phayao and Chiang Rai. Many Chiang Rai residents worried this might be a repeat of the 2014 6.3-magnitude quake, which had shaken Phan district, damaged buildings and caused “superficial” cracks to the Mae Suay dam. 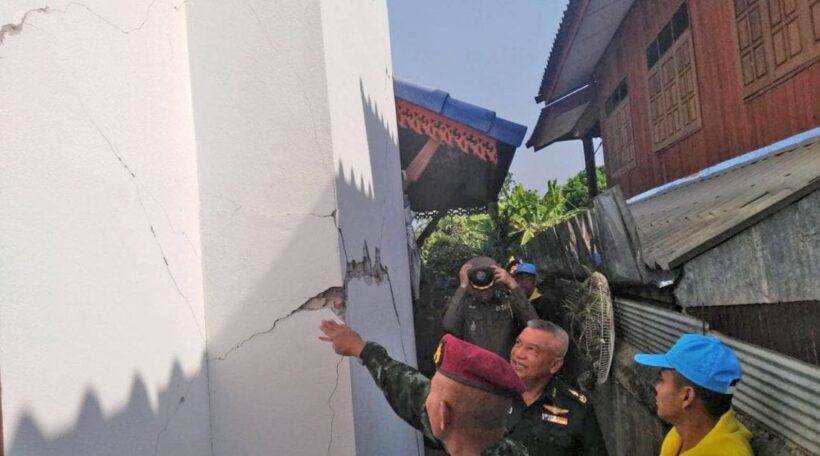 No fatalities or injuries reported in Lampang earthquake 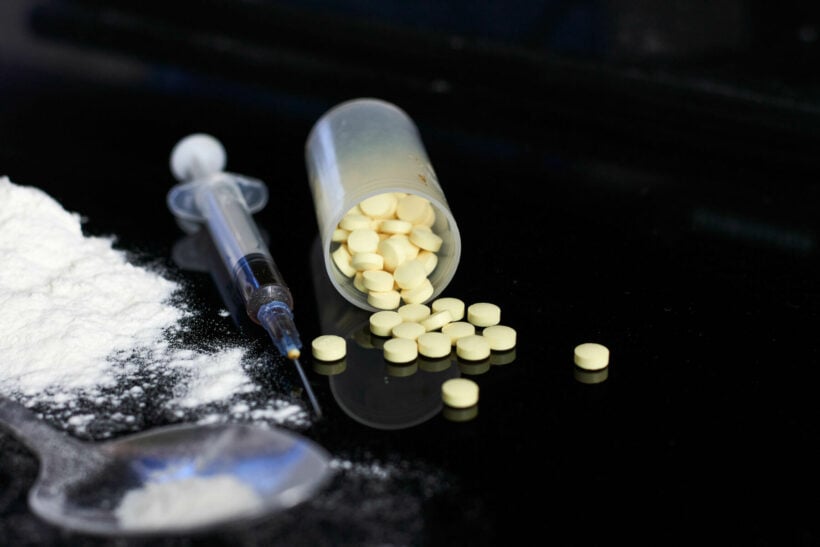 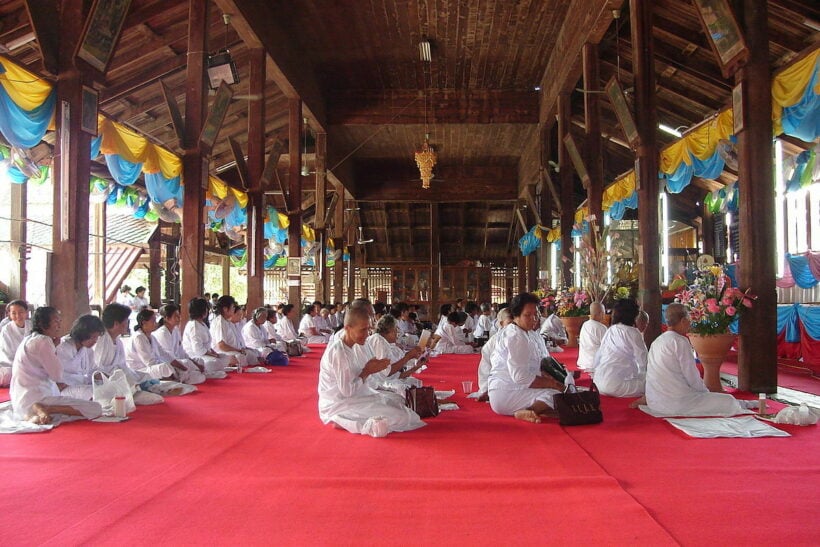 50 Buddhist nuns have tested positive for Covid-19, causing the Chiang Mai dharma practice centre, where they live, to be closed. The Chiang Mai public health office closed the centre, located in the main city district for 2 weeks from Saturday. People who took part in activities at the centre from April 7 are being asked to take a Covid test at the field hospital in the Chiang Mai International Exhibition and Convention Centre.

The dharma practice centre is also being investigated for allegedly providing other services without permission, including free traditional disease treatments like herniated discs, knee pain, and tendinitis. 20 patients that were first linked to the Covid cluster at the centre have been under care since Friday. Yesterday saw 14 more infections linked to the centre, totalling 34. Today, that number has risen to 50.

Daily cases in Chiang Mai have reached 151, with an investigation into clusters linked to the dharma meditation centre, a nursery in Doi Saket district and a nursery in Muang district, showing most patients contracted the virus from social activities.

3 more clusters were identified with the first being at a company where 13 workers in the same division tested positive for the virus. One of the workers who visited an entertainment venue is thought to have spread the virus to his coworkers. He was asymptomatic and went to work infected, ate meals with coworkers and attended meetings. The workers says he did not know he was infected.

The second cluster sprouted from a funeral in Om Koi district. An infected person participated in the funeral, passing the virus to 7 others. Now, 200 people who were in close contact with the infected person are being tested. The third cluster arose from a party in a direct-sales firm where 25 people were infected.

Today, there are another 2,438 new Covid-19 infections reported in Thailand. The number is a sight drop on Saturday’s total of 2,839 new infections. But Sunday’s totals are often lower due to the reporting from provinces. 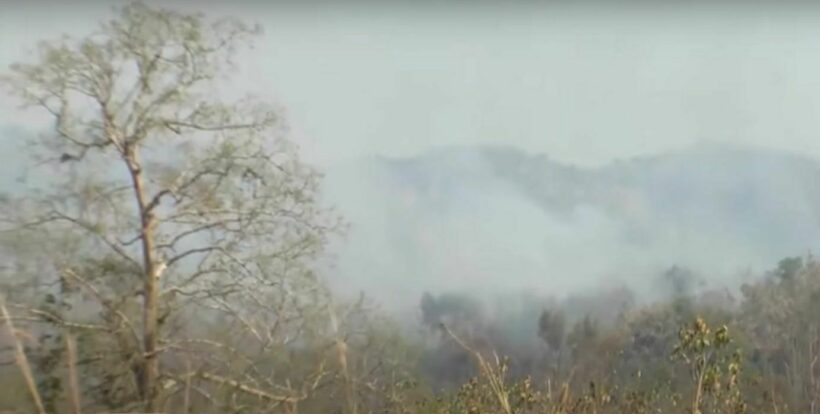 The emerging technology of biochar may be at the forefront of dealing with Chiang Mai and its globally infamous smoke and air pollution. After another terrible burn season where the air quality was rated among the worst in the world, Chiang Mai is often rated the most polluted city in the world.

As scientists worldwide tackle climate change, Chiang Mai stands out as an example of how animal agriculture is a major and often overlooked part of the climate crisis. While coal burning and gas-guzzling automobiles tend to get the most attention in the climate change debate, food production is a massive contributor to the problem.

Michael Schaefer, an American university professor now running Chiang Mai’s Warm Heart Foundation explains that as people earn more money, they want to indulge in costlier foods such as meat and dairy. With the increased demand for these animal products comes an equally increased need for the staple crops that feed these animals like corn.

Corn growth has become a linchpin of farming in Chiang Mai as well as Myanmar and Laos. This farming feeds animals like chickens and pigs, whose consumption is unlikely to wane in popularity anytime soon. But burning the waste from the corn to feed livestock is what creates Chiang Mai’s massive smoke problem.

Corn is an inefficient crop with only 22% of the plant being edible making the amount of waste to be burned off problematic. The husk, cob, and corn stock have to be cleared before you can plant the next year’s crop. Other methods of clearing the land like tractors or hand picking are just too time-consuming and inefficient when a fire can do the job quickly.

The Warm Heart Foundation has proposed turning this waste in Chiang Mai into biochar, a version of charcoal that’s far more eco-friendly. Biochar can be used to make smokeless briquettes for our barbecues, as well as soil decontaminant and fertilizer. By using the waste from the burn off to create byproducts farmers can essentially have a secondary income source.

Creating biochar does not require expensive high-tech machinery, as smokeless incinerators can be built out of old oil drums or livestock feeding troughs. Putting that carbon-rich biochar back into the soil in Chiang Mai will last for thousands of years and remove it from the atmosphere.

Animal agriculture and food systems contribute 25 to 30% of the greenhouse emissions in the world according to the Our World in Data project from Oxford University. Agriculture accounts for half the usable land on the planet and 77% of that land is farming livestock, even though the animals raised only provide about 18% of the calories the world’s population consumes. Half of all the farming harvests go to feed these animals being raised for consumption. Animal agriculture also uses 15 times more land, 13 times more water, and 11 times more fossil fuel to generate protein.

It’s not a perfect solution for the environment, but a step in the right direction as converting the world to a plant-based diet is not likely anytime soon. The UN Food and Agriculture Organisation estimated that farmlands roughly the size of North America and Brazil combined could be returned to nature if everyone stopped eating meat.

Letting nature take its course is still the best way to remove carbon from the atmosphere, but without a vegan revolution, this is not likely. If Chiang Mai could start using this biochar production model it would remove hundreds of thousands of tons of CO2 from the atmosphere and create more fertile fields allowing farming land to potentially be decreased and returning some land to nature.