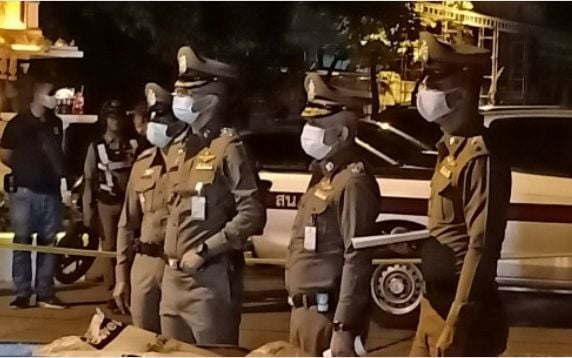 A man was shot to death at a parking lot outside a restaurant in Bangkok’s Noi district. Police, accompanied by a doctor from the Siriraj Hospital, arrived at the scene around 2am this morning and found 49 year old Damrong Taweekkhet with 2 gunshot wounds in his chest.

Damrong, a fruit vendor, was chatting with his friends in the parking lot when a motorbike driver rode up and started arguing with Damrong, a witness told police. The driver allegedly pulled out a gun and shot it multiple times.

Police say they suspect the shooter is Damrong’s friend who had argued with him inside the restaurant prior to the shooting. Police are still looking for the suspect and say the motorbike was seen driving down Boromratchonnee Road.