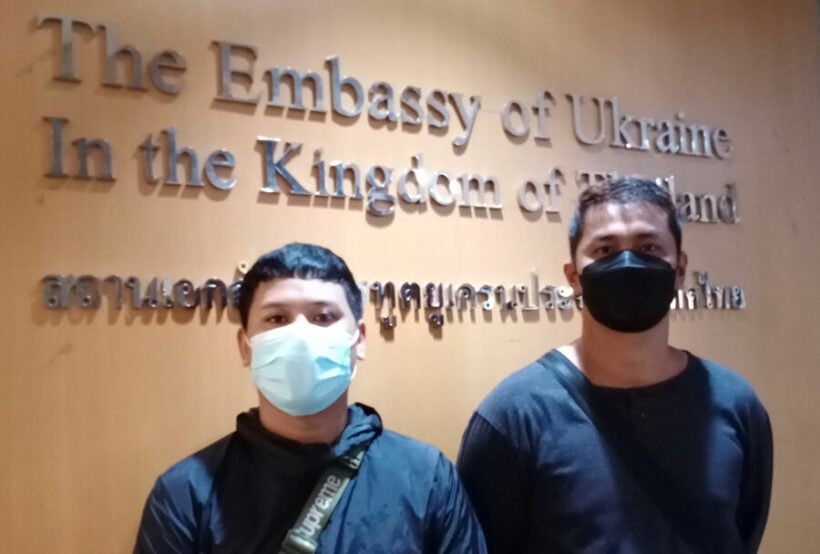 A former member of the Royal Thai Air Force is volunteering to fight alongside the Ukrainians defending their country against a Russian invasion. According to a Coconuts report, the former airman, who gives his name only as Chanapong, turned up at the Ukrainian embassy in Bangkok yesterday, saying he was there to enlist.

“I want the Ukrainian people to know that they are not alone. If they ask for help, I’m willing to answer.”

Chanapong says he was compelled to act after seeing footage of Ukraine under attack, children being killed, and families torn apart.

“I did not join (the Ukraine legion) as a Thai national, but I did so as a human being.”

Having served 2 years in the Thai air force, he says he’s physically and mentally prepared and his experience means he’s qualified to join the newly-established Ukrainian International Legion. Earlier this week, Ukraine President Volodymyr Zelensky said all visa requirements would be waived for foreign volunteers willing to help Ukrainians defend their homeland.

Chanapong is no stranger to fighting injustice, having participated in Thailand’s pro-democracy protests. Last year, he took part in the anti-government rallies in the Din Daeng area of Bangkok, witnessing violent clashes between police and protesters on a nightly basis. However, he’s well aware that Ukraine poses a much bigger risk.

“At the Din Daeng protests, the worst is that I got beaten and arrested. But this time, if I were to reach Ukraine successfully, I might be dead.”

There’s one obstacle Chanapong must overcome if he is to make it to Ukraine.

“The round-trip flights from Thailand to Ukraine are not cheap. Would a millionaire or business owner go? No. It’s the little people feeling defeated about humanity that want to go and help, but we need financial support, too, whether it’s from Ukraine or Thailand.”

kalyan
555
Insurgent
Braver than his Prime Minister
HolyCowCm
Stands straight up and fights for his people against a dirty regime, and will go fight for another country's people for injustices laid upon them ordered by a mad lunatic.
swsmedia
What a brave man that will defend Ukraine against evil Putin, compared to the fool THAT IS Prime Minister in Thailand.
RJBT
If I was younger I would have also volunteered. I am nearly 79 and I would be more of an nuisance than assistance