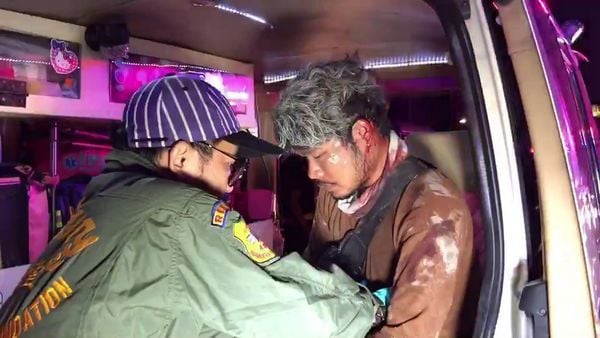 5 construction workers were injured in the early hours of this morning when a column under construction along a future elevated train line came crashing down. A Skytrain Pink Line pillar under construction collapsed on Chaengwattana Road in Nonthaburi’s Pak Kret district, just north of Bangkok. The workers were about 7 metres from the ground and pouring concrete on top of the the column when subsiding ground caused it to collapse, injuring all 5, according to police. 1 suffered multiple fractures and was taken to hospital in serious condition, according to the Mass Rapid Transit Authority.

One of the workers, 29 year old Narongdak Borirak, 29, said he and 3 others along with a foreman were cementing the pillar when it suddenly collapsed. The work site was at the future MRT Si Rat by a Makro store on Chaeng Wattana Road. The MRTA said that the collapse was caused by a combination of added weight from the additional concrete and inadequate temporary support shifting due to continual rainfall. They say the onsite team is investigating every column now as well as construction facilities to prevent it happening again.