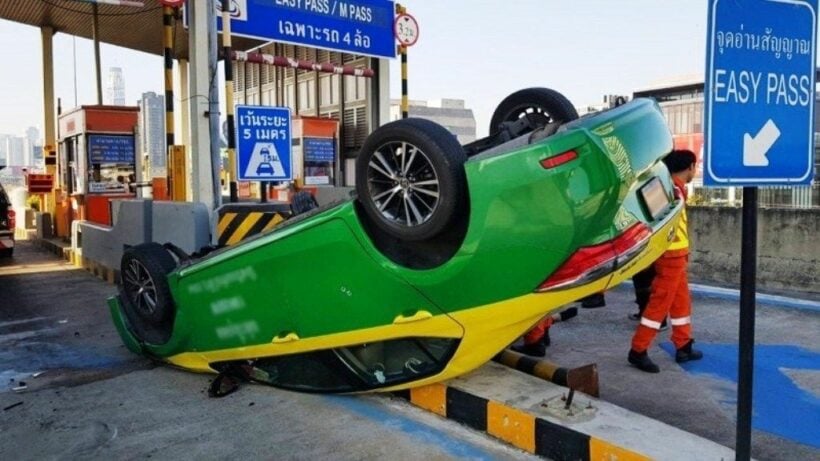 PHOTO: The taxi comes to rest upside-down at a toll booth on the Din Daeng Tollway

A taxi driver has died after passing out on Bangkok’s Din Daeng tollway, crashing his taxi into concrete barriers and flipping the car over. Police and rescue workers arrived to find the driver, 59 year old Manas Mapradit, already deceased in the car, with his female passenger trapped inside. They managed to rescue the woman and take her to hospital.

The unidentified woman told police that the taxi driver mentioned his health problems shortly before passing out.

Elswhere in Bangkok, investigations continue into the mystery a gunmen that fired shots into the white Lexus of former tourist police chief Surachat Hakparn, aka. “Big Joke’s” on Monday night.

Surachat was at a “business meeting” (his own words, but later revealed to be a massage establishment) at the time of the incident, his white Lexus SUV parked outside. All eight bullet holes were found in the doors on the left side, according to The Bangkok Post.

Surachat, who’s now an adviser to the Thai PM’s office, was certain the shots were meant to kill him, but said he had no idea why and had no conflict with anyone.