An emerging human tragedy as at least 208 people have now been killed in the Philippines by Typhoon Rai (locally known as Typhoon Odette). And that toll is expected to rise as emergency and armed services get to the communities in the central Philippines area hardest hit. There are fears widespread landslides and floods have probably claimed many more lives.

The typhoon made landfall in the archipelago last Thursday and spent the next two days rampaging through central islands. knocking out power and communications in entire provinces, blowing away ramshackle houses and causing widespread flooding with torrential rain.

Authorities admit that most of the central island’s commercial and cargo vessels are now unsuitable to be put into action, effectively cutting the region off from the rest of the country. Rescue teams describe scenes of “complete carnage”.

The typhoon, the strongest to hit the Philippines this year, almost immediately knocked out communications and power in the areas directly in the path of the west-moving storm, ripped off roofs, flush concrete power poles around like toothpicks and caused massive flooding.

The International Federation of Red Cross and Red Crescent Societies is launching an emergency appeal. They’re seeking US$22 million to fund long-term relief efforts. The chair of the Philippines Red Cross, Richard Gordon, told the BBC that volunteer teams are reporting “complete carnage in the coastal areas. Homes, hospitals, school and community buildings have been ripped to shreds”.

“Volunteers are on the scene giving out urgent help for people who have lost everything.”

Typhoon Rai (aka Odette) smashed into the Philippines on Thursday evening as the world’s worst super typhoon this year (it’s the 15th storm to hit the country this year) packing wind speeds of 195 kilometres (120 miles per hour).

300,000+ people fled their homes and the region’s beach towns resorts as the storm pushed through the southern and central regions. The storm has now cleared the Philippines and is located just east of central Vietnam off Nha Trang, veering north into the South China Sea, spotting just south of Hianan Island and then dissipating. 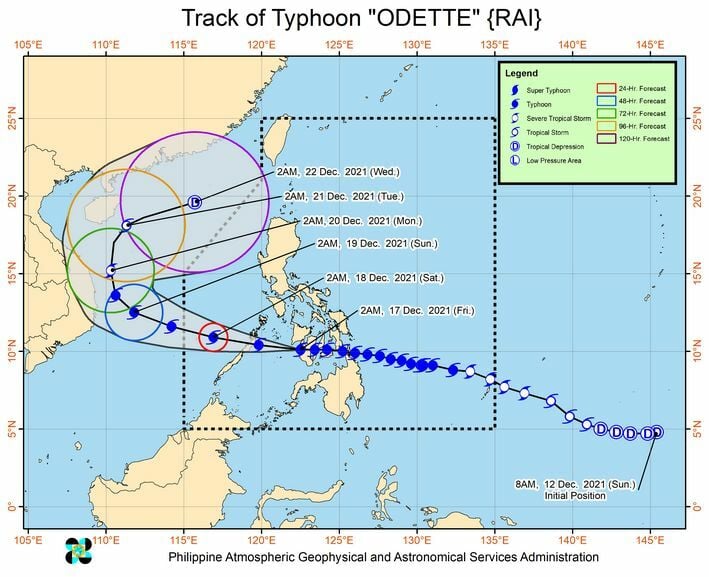 On the island of Bohol, off Cebu City, alone, mayors in the towns are reporting at least 63 people have died, pushing the official total up to 89. 10 people are still missing on the island, and 13 were injured.

An aerial survey of damage to parts of Bohol indicate widespread devastation.

The islands of Siargao, Dinagat and Mindanao islands, closer to the eastern coastline, also suffered heavy damage as the full impact of the storm made landfall. Tourists are still being evacuated from the islands today.

The Siargao town of General Luna, popular for surfers and holidaymakers, and already gearing up for a big Christmas holiday, has been shredded with with buildings stripped of their roofing and rubbish strewn around the streets.

In the neighbouring island province of Dinagat, the vice governor said yesterday that an estimated 95% of the island was “destroyed”.

“At least six people have been reported killed in the areas already reached by provincial authorities, but many parts of the province were still inaccessible.”

1000’s of military, police, the coast guard and emergency response personnel are being deployed to to help with the immediate search and rescue efforts. Meanwhile, Filipino President Rodrigo Duterte has ordered officials to direct urgent resources to help those in need.

Typhoon Rai’s wind speeds eased to 150 kilometres per hour (93mph) as it finished its path of destruction and headed west into the South China Sea, but it left a trail of torrential rain that has flooded villages, uprooted trees and blown over thousands of wooden structures that used to be homes.

In 2021, the first tropical depression formed in January and the first tropical cyclone named Dujuan (Auring) developed on February 16. So far this season, there have been 41 tropical depressions, 22 total storms, 9 typhoons and 5 super typhoons (an unofficial category used by the Joint Typhoon Warning Center for ‘extremely strong’ typhoons). A super typhoon is equivalent of a Category 5 hurricane.

Scientists continue to sound warnings that typhoons (cyclones and hurricanes – same thing) are becoming more powerful each year and will continue strengthen more rapidly, and frequently, as the world becomes warmer because of human-driven climate change.

The Philippines is hit by an average of 20 storms and typhoons every year, usually during the typhoon season between June and October. Super Typhoon Rai is both late and the hardest hitting of this year’s typhoons.

mickkotlarski
I truly sympathize with what the Philippines has to endure when it comes to mother natures wrath.

Smithydog
She certainly can be violent if she chooses. I have had the displeasure of going through 4 cyclones over my life and the devastation they can cause is bad, but thankfully not so deadly as what the Philippines have experienced…

mickkotlarski
3 minutes ago, Smithydog said: She certainly can be violent if she chooses. I have had the displeasure of going through 4 cyclones over my life and the devastation they can cause is bad, but thankfully not so deadly as…

Smithydog
10 minutes ago, mickkotlarski said: Cheers Smithydog. For me its been 2 bush fires, my house flooded and one earthquake. If there is a positive its that people can put their differences away as we all suffer. So right. I…

Soldier dies, another seriously injured, after plunging off cliff in northern Thailand