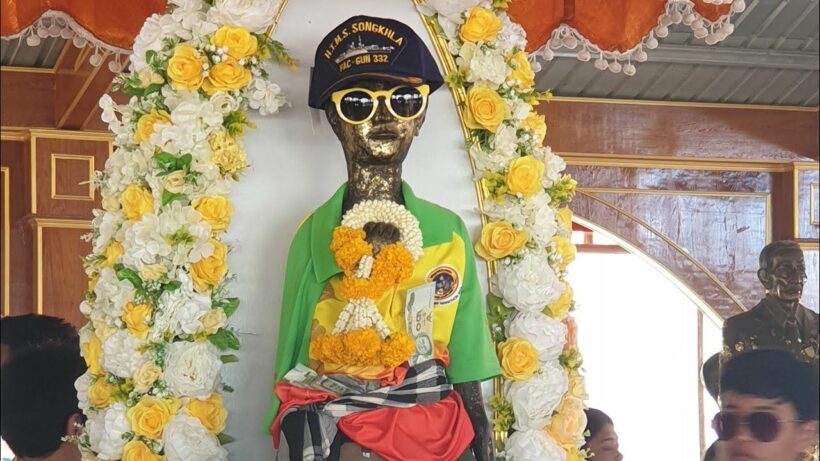 Thai tourists destinations have gone quiet due to the pandemic, but one southern Thailand temple is thriving. Nakhon Si Thammarat’s Wat Chedi is known for granting wishes, and apparently many come true (although people don’t tend to talk about the ones that don’t come true). It is packed with visitors not just on the weekends, but every day.

When a wish is granted, people return to the temple to set off fireworks and donate a rooster statue along with other offerings in honour of Ai Khai. Military camouflage uniforms, black glasses and slingshots are popular offerings. The frequent boom from firecrackers and the thousands of rooster statues show that people are getting what they want.

Many believe the spirit of a boy, about 9 or 10 years old, inhabits the temple. They call him ‘Ai Khai’, which is a common nickname in the South for young boys. Legend has it that Ai Khai was a disciple of a revered monk during the Ayutthaya period. They say he drowned in a nearby river, but his spirit is still at the temple.

So many people visited the temple last month, many trying to get their hands on a special Ai Khai amulet, that the temple had to suspend amulet trading. The number of visitors continues to rise. The number of monthly visitors at the temple has increased from 300,000 to 500,000 people, according to director of the Tourism Authority of Thailand’s Nakhon Si Thammarat branch Pitsinee Thasniyom.

Nearby business and hotels have also benefited from the temple’s popularity. The province’s hotel occupancy rate is now at 90%. Tourists spent more than 800 million baht during the long holiday from September 4 to 7, Pitsnee says.

Flights to Nakhon Si Thammarat have doubled from 14 daily flights to 30, according to the chairman of the province’s chamber of commerce Krakow Tetiranon. He adds that airlines are continuing to offer new flights and hotels are often fully booked.

“As crowds have been drawn to the province over the past three months, local authorities have taken the opportunity to promote other kinds of activities, such as environmental and cultural tourism.”

But not every district in Nakhon Si Thammarat is benefiting from the temple’s success. Krakow says 5 of the 23 districts are seeing a gain: Muang, Sichon, Khanom, Tha Sala and Lan Saka. Sichon’s neighbouring district, Khanom, has changed since the pandemic. Once known for it’s quiet beach and “small town” feel, Khanom has become packed with tourists during the weekends.

“Uzbek footballer is the only player infected” – Public Health Ministry