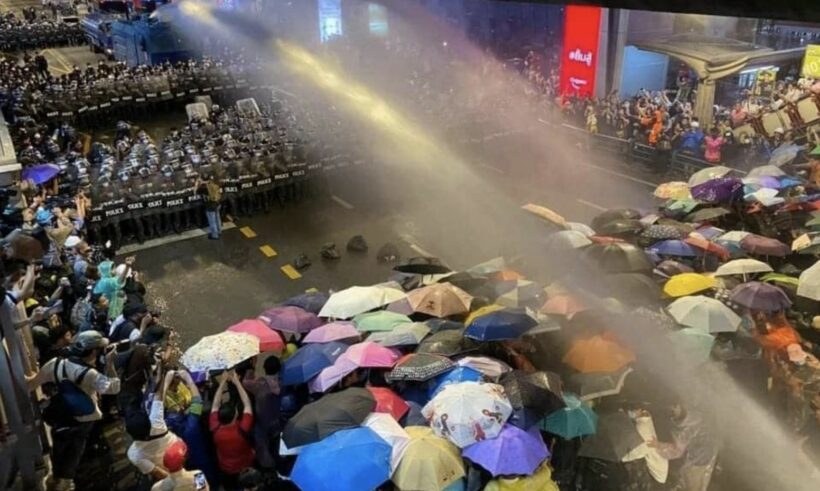 Another pro-democracy rally has been called today by protest organisers. With many of the original leaders now in custody, many more have stepped up to take their place and are using a sophisticated network of messaging and social media to stay one step ahead of the police and authorities that are trying to intercept their plans.

Another rally is planned for the city this evening. This follows the heavy-handed break up of last nights rally, deemed illegal under the current State of Emergency, by Thai police and riot squads.

Just before 8pm Thai police, having earlier cleared and secured the Ratchprason intersection 800 metres away in “preparation” for a proposed protest, police arrived with 3 large water cannons and moved in on the peaceful assembly.

In an official statement this morning, the “Khana Ratsadorn” (People’s Party) condemned last night’s “violent crackdown” on the rally. Hundreds of people live streamed the events on social media to an international audience of several million. They were able to see protesters sprayed with high-pressure water cannon and charged by riot police with shields and batons.

“The violent dispersal of the crowd “demonstrates that the government andthe military have declared themselves enemy of the people.”

Khana Ratsadon (Thai: คณะราษฎร), meaning ‘People’s Party’, was a Siamese group of military and civil officers, and later a political party, which staged a bloodless coup against King Prajadhipok’s government and transformed the country’s absolute monarchy to a constitutional monarchy on June 24, 1932 – Wikipedia

“We want to reaffirm that we will continue with a rally on October 17 (today) even though the government might have arrested all of our key leaders.”

But police have defended their actions, insisting that the response taken against the protesters “were proportionate and necessary” as the protesters defied the State of Emergency that bans public gathering of more than 5 people.

The deputy metropolitan chief, Pol Maj Gen Piya Tavichai, denied that tear-gas was used against the protesters. Many social media reports from the scene circulated as the police moved in on the protesters that they were using tear gas. Some protesters also reported that the blue-dyed water, used in the water cannons, was stinging their eyes.

The organisers have scheduled today’s rally for 4pm but would not disclose the venue.

The crackdown last night, a watershed moment in the current round of previously peaceful protests, has been condemned by international business and human rights groups, many seeing the response as “an excessive use of force against unarmed and peaceful demonstrators”.

From Human Rights Watch this morning…

At about 6:30 p.m., police forcibly dispersed a demonstration organized by the pro-democracy People’s Movement in which thousands of people, including many students, took part. Human Rights Watch observed the police using water cannon laced with blue dye and an apparent teargas chemical to break up the protest in Bangkok’s Pathumwan shopping district. The police then charged in with batons and shields to disperse the protesters. Scores were arrested. The government has not yet provided details about people in police custody. After the crackdown, 12 protest leaders are being sought on arrest warrants.

Student unions of 8 leading Thai universities last night issued a joint statement condemning the crackdown and called on the government to “use peaceful means to resolve the ongoing conflict”.