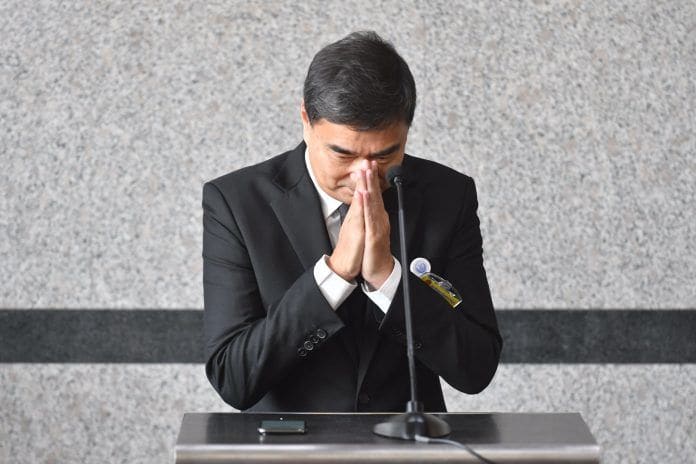 Former Democrat Party leader Abhisit Vejjajiva has announced his resignation as a parliamentary MP, saying he could not break his word and follow his Democrat Party’s resolution to support Gen Prayut Chan-o-cha as the next PM.

He announced his resignation in the lead up to today’s vote for a new PM, now a cakewalk for the existing PM Prayut after the Democrats threw their support behind the Palang Pracharat party last night.

Mr Abhisit said that before the election he had announced his policy on not supporting Prayut as PM as the then-Democrat leader, and approximately 4 million people voted for the party while being aware of this clear stance.

“I could not attend today’s parliament and go against the resolution of the party to support Gen Prayut. That would mean I would break my word… Today I have only one choice to protect the dignity of mine and my party, that is to keep the promise,” he said in a Bangkok Post article.

“In my political career, I adhere to ideals and principles because they can create long-term happiness for people. Therefore, I resign as MP from now on.”

Abhisit says he rejected other Democrats’ proposal last night for him to abstain in the vote for the new PM.