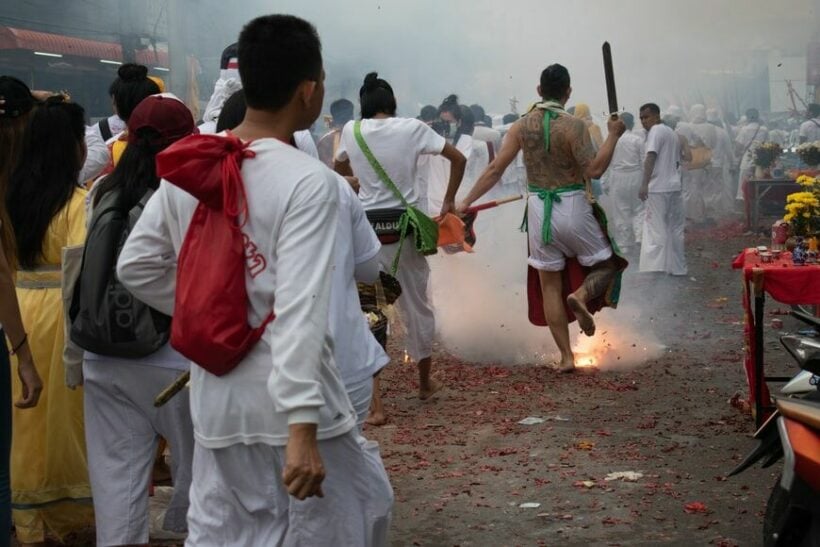 Last night, a giant celebration marked the end of the 9-day Phuket Vegetarian Festival. A parade made its way through Phuket Town, with devotees either marching or travelling by motorcade. Midnight marked the hour at which observers were able to once again eat meat. Processioners marched through the streets of Phuket Town for hours carrying flags and shrines, while members of the crowd threw firecrackers. Many small tables were set up in the road with offerings to the Ma Song and their helpers.

The Phuket Vegetarian Festival is known for its Ma Song. These spiritual devotees will self-mutilate, slicing their cheeks and tongues with swords, knives and spikes. They will then march for hours, the intention being that through their pain they can achieve a holy and spiritual state. The Ma Song have helpers who follow them along to clean up their blood and pat them down with towels so that they don’t catch on fire from the many fireworks being thrown.

This year certain Covid-19 measures were in place, such as requests that people wear masks and practice social distancing. The Ma Song were also asked to either ride by motorcade, or not engage in any activities that may result in the spread of the virus. Observers crowded the roadsides to throw firecrackers and receive blessings from the Ma Song as they walked by. At midnight a massive bonfire was lit.

A somewhat more subdued celebration will take place today, with shrines holding ceremonies to lower the Go Teng poles, which were raised to mark the official beginning of the festival. The final closing ritual of the festival will be held at 10pm tonight in Saphan Hin park.

Devotees from each of the shrines will gather to perform blessing ceremonies. The purpose of these ceremonies is to call the Jade Emperor and the Nine Emperor Gods to return to the heavens. The final lowering of the Go Teng poles marks the conclusion of these celebrations until next year.

gummy
So now all the vegetables can rejoin their pals in government  😂
Grumpyoldman
"Last night, a giant celebration marked the end of the 9-day Phuket Vegetarian Festival."   It was scheduled to last 16 days but everyone got too weak to carry on.

gummy
8 minutes ago, Grumpyoldman said: "Last night, a giant celebration marked the end of the 9-day Phuket Vegetarian Festival." It was scheduled to last 16 days but everyone got too weak to carry on. They need a good steak to build their…