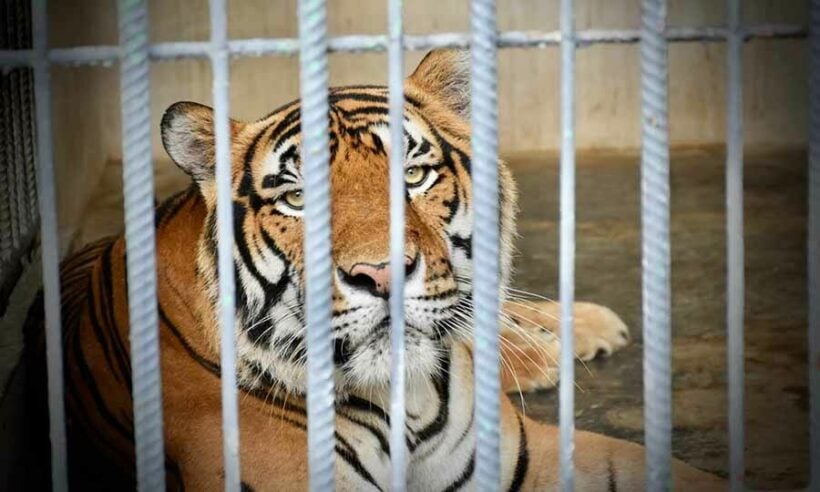 The threat of permanent closure hangs over a tiger park in the north-eastern province of Mukdahan, due to the alleged illegal smuggling of tiger cubs. The Department of National Parks, Wildlife and Plant Conservation has brought charges against Mukda Tiger Park & Farm, also known as Mukda Suan Sua, and ordered the facility to close for 30 days.

The DNP also plans to withdraw the park’s operating licence, a move that could lead to permanent closure, as this is not the park’s first offence. In December, Wildlife Friends Foundation Thailand, a non-governmental organisation involved in the rescue of domesticated and captive wildlife, reported that officials seized 5 live tigers and a severed tiger head from the park. Subsequent DNA tests showed that the tiger cubs were not the offspring of parenting tigers at the park, arousing suspicions that they had been smuggled in. The park was shut for a month in January as a result of the findings.

In the latest development, DNA tests on another 2 tiger cubs, “Khao Mao” and “Khao Pluak”, show they too were not born at the park. The park operator had claimed the cubs were the offspring of parenting tigers, “Do Do” and “Ma Feung”, but the DNA tests show otherwise. The DNP believes these cubs were also smuggled into the facility.

According to a Bangkok Post report, Sompong Thongsrikhem from the Wildlife Conservation Office says this latest violation could see the park shut down for good. According to wildlife protection law, the DNP can permanently close a facility that has been temporarily closed on 2 occasions in a 12 month period. He says he expects the park to close for good this year. The owner of the park also faces up to 5 years in prison if convicted of wildlife smuggling and perjury.

There are 46 tigers and cubs at Mukda Suan Sua, all of which will now be DNA-tested. So far, tests on 6 cubs show none of them were born at the facility. The DNP says it will also be expanding DNA testing to cover 1,500 tigers at 39 tiger parks across Thailand.

Thailand to reduce quarantine to 7 days, meeting to confirm next Monday | VIDEO