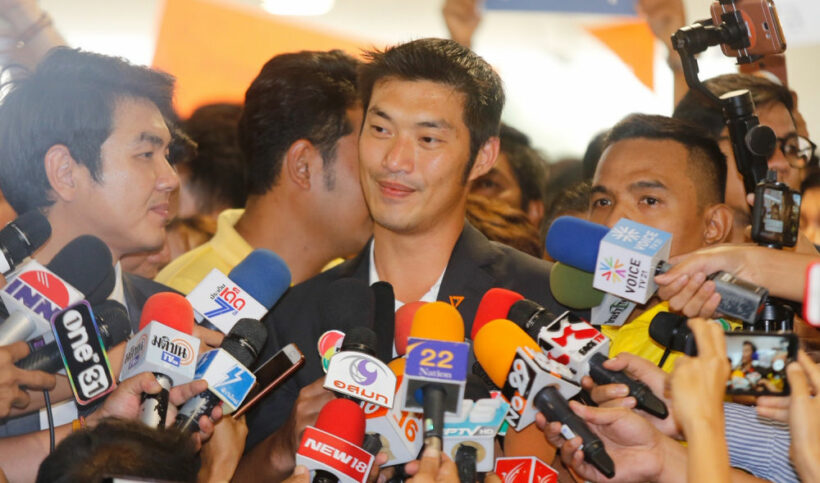 At least 12 members of the Future Forward Party, including Thanathorn, have now been singled out for alleged shareholdings in media companies, putting them at risk of being disqualified as members of the House of Representatives.

The law prohibits holders of shares in media companies from contesting elections. Party dissolution is also a possible punishment for parties that approved such ineligible candidates, according to the law.

Thanathorn met the Election Commission to clarify his case during a six hour meeting yesterday, but another anti-junta party, Pheu Thai, has now targeted the pro-junta Phalang Pracharat Party for a similar violation. They claim its executive Chanwit Wiphusiri was allegedly holding shares in media companies. Pheu Thai said it would lodge the complaint with the EC today (although as an official public holiday the EC may be taking the day off too).

Chanwit contested and won from Bangkok’s Min Buri district as Phalang Pracharat’s candidate and is set to become a member of the lower house.

At a press conference yesterday, Pheu Thai’s legal expert Chusak Sirinin said that as it could be proved Phalang Pracharat had approved Chanwit to contest in the election while he was a shareholder in a media company, the EC could petition the Constitutional Court to disband the party. Chanwit, meanwhile, argued yesterday that he was only involved in real estate business. His company was not involved in media, though it appeared on paper to be running a media business.

Separately, Thanathorn warned that if Future Forward members became targets for having media shareholdings, then many others from other parties would also have to go down for the same reason.

“If they’re going to apply this standard, MPs from all parties will disappear from the lower house.”

Royal Coronation ceremonies in the inner sanctum of the Grand Palace